SINGAPORE - An online petition for men and women to pay equal premiums for the upcoming CareShield Life scheme has garnered more than 1,600 signatures as of 10pm on Friday (July 13) after it was launched a day before.

It was started by a group of young women campaigning to revise the gender-differentiated premiums of the long-term disability insurance.

Speaking on behalf of the three, Ms Guan told The Straits Times: “We didn’t want to be passive participants in society anymore. We could have kept the discussion among ourselves or voice our stance in a public sphere. We chose the latter.”

When introduced in 2020, CareShield Life will be compulsory for Singaporeans aged between 30 and 40. In subsequent years, every Singaporean goes on the scheme automatically on turning 30.

But women will pay a higher premium based on research that they live longer and are expected to suffer from disabilities for a longer period.

“It is an outrage that women are being penalised for living longer,” said the three women in the petition.

“What statement are we sending to women, young and old, when we penalise them for simply... existing? What message does this send to the world about our nation?”

Under the proposed CareShield Life, a 30-year-old man in 2020 will pay an annual premium of $206, while a woman of the same age pays $253. Both sums are before subsidies.

The petition calls for the premiums to be made equal. 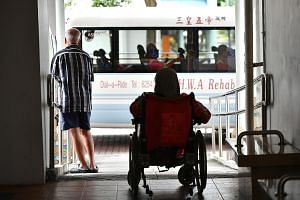 Some MPs against higher premiums for women

During a debate on CareShield Life in Parliament on Tuesday, a dozen MPs out of the 19 who spoke on the proposed scheme were opposed to women paying higher premiums than men.

Replying, Senior Minister of State for Health Amy Khor said the decision to have women pay more was a difficult one but actuarially sound as women’s life expectancy is 85.2 years and men’s, 80.7 years. Disability is more likely to happen in a person’s older years.

But the differentiated premiums have sparked unhappiness online, with many calling the move discriminatory and sexist.

Facebook user Evon Qin asked: “Why didn’t they factor in the fact that women get paid 43 per cent less than men in Singapore?”

Another user Patricia Choy wrote: “Why stop at gender? Why not go on to race, occupation, or what have you? You can find risk differences along all sorts of lines if you look for them. Defeats the universality concept of the scheme.”

In the petition, the group also wrote: “It’s 2018. Our society as a whole is slowly but surely appreciating the role of women.

“Gender inequality issues in pay, healthcare and social rights are gradually being addressed around the world. Collectively, we need to be moving forward and consistently exploring ways to narrow the gender divide, not emphasising it.”

Ms Guan told ST: “We are not policy writers. We are not experts in this field. But what we can do is to make sure we take a stand on matters that we believe in. We hope that this sparks more constructive conversation and exchange of ideas to collaboratively solve the issues that affect us all.”