SINGAPORE - From early next year, retailers will have to keep tobacco products out of sight, following amendments to the law approved in Parliament on Monday (March 14).

The ban on the display of such products is intended to prevent impulse buys, especially among young people who have not yet picked up smoking.

Tighter rules on online tobacco ads were also introduced, banning advertisements that come from Singapore even if they are not targeted at Singaporeans.

"With the expansion of online access, there is increasing use of the Internet for tobacco advertising and commerce," said Senior Minister of State for Health Amy Khor in moving the Tobacco (Control of Advertisements and Sale) (Amendment) Bill. 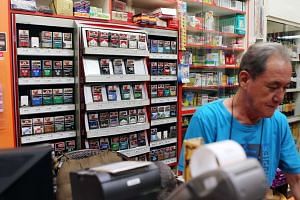 No more shop displays of tobacco items by 2017

MPs welcomed the new anti-smoking measures, although several - such as Jurong GRC MP Tan Wu Meng - pressed for even stricter measures to snuff out smoking.

These include raising the minimum legal age from 18, as well as making smoking illegal for all those born after a certain year.