ST poll shows many expected it to end by now, amid confidence in how outbreak is managed

The pandemic has gone on longer than most people had anticipated, but many are more willing to follow safe management measures than a year ago, a new poll has revealed.

The poll of 1,000 people aged 16 and above noted that almost 80 per cent felt the pandemic would have ended by now.

It also found a high level of confidence in Singapore's handling of the outbreak, with 24 per cent strongly agreeing that it has the pandemic under control, while 53 per cent somewhat agreed.

The remaining 23 per cent either indicated a neutral response or disagreed with this sentiment.

But rather than being complacent, 62 per cent said they are more likely to wear their mask properly now than during the circuit breaker.

Similarly, 54 per cent are more likely to observe a 1m safe distance from others now than a year ago, while 34 per cent said there is no change in their likelihood of doing this.

The poll, commissioned by The Straits Times (ST) and carried out by Milieu Insight from March 25 to March 29 this year, also noted that 35 per cent said they are now more likely to see a doctor for only mild symptoms, while 44 per cent said there is no change in their likelihood of doing this.

The notion that safe management measures are excessive and should be relaxed was rejected by 39 per cent, while 24 per cent agreed.

This was in contrast to a poll conducted by ST last August, which found that 44 per cent of people were getting tired of following safety measures.

Associate Professor Hsu Li Yang, the vice-dean of global health and programme leader of infectious diseases at the National University of Singapore (NUS) Saw Swee Hock School of Public Health, pointed out that last August, there was no obvious end in sight for safe management measures. 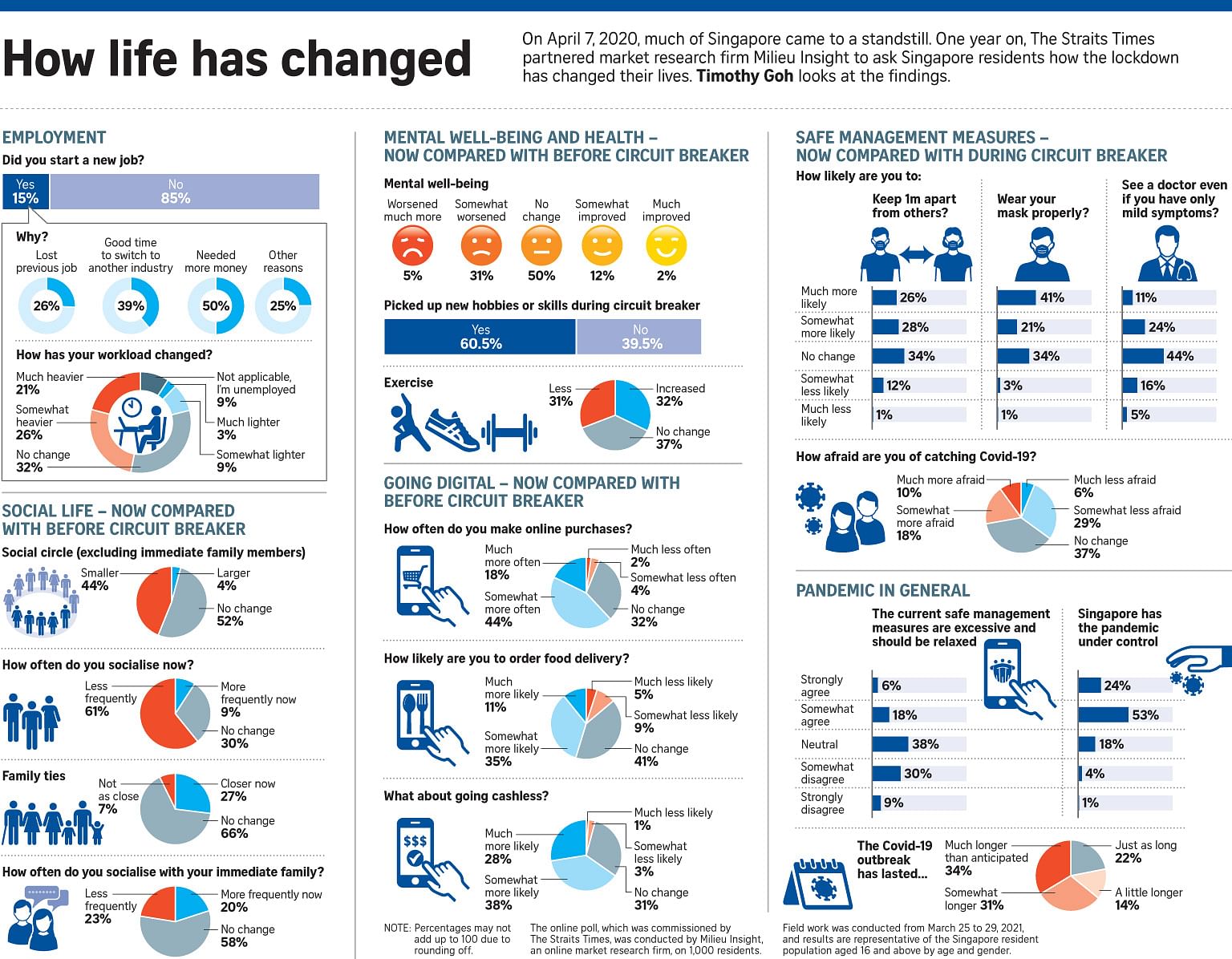 But with vaccines now being rolled out, people can more clearly see that restrictions will likely be relaxed in the future.

He added that pandemic fatigue is more likely to occur based on cultural factors, uncertainty and multiple episodes of stepping up or down of restrictions.

I think there has been very responsible messaging in Singapore, and a good relationship between the community and the leadership helps people understand the need to sustain efforts. Community engagement is arguably the most important component of any outbreak response.

But since the circuit breaker, Singapore has generally not had the need to ramp up safe management measures and instead has progressively relaxed them.

"That gives most people the motivation to tolerate and adapt to existing measures for a longer period," said Prof Hsu.

He said: "It shows that the coordinated communications around the virus and safe management measures have had a successful impact on people.

"While there have been elements of public criticism, which is expected and necessary to have in good governance, those statistics reflect the understanding and cooperation of the people towards the measures laid out."

Prof Car added that people could also have seen safe management measures helping to curb the spread of the virus over the past year, which may have motivated them to want to continue observing the rules.

Professor Dale Fisher from the NUS Yong Loo Lin School of Medicine's Department of Medicine agreed, adding: "I think there has been very responsible messaging in Singapore, and a good relationship between the community and the leadership helps people understand the need to sustain efforts.

"Community engagement is arguably the most important component of any outbreak response."

He called for people to still get tested even if they have mild symptoms, as this is key to determining if they have Covid-19 or another viral infection.

Prof Car said it might be worth examining the concerns of the 23 per cent who did not feel Singapore has the pandemic under control.

"It also shows that there are no laurels to rest on - having a pandemic 'under control' is quite different from exiting it," he said.

"I anticipate that to be the next step. People would be understandably looking towards a clear pandemic exit strategy for Singapore."

How life has changed

A version of this article appeared in the print edition of The Straits Times on April 07, 2021, with the headline 'Pandemic drags on, but people more willing to comply with curbs'. Subscribe
Topics:
More
Whatsapp Linkedin FB Messenger Telegram Reddit WeChat Pinterest Print Purchase Article Copy permalink