There is a new personalised tool that can detect cancer, predict patient survival and also how well a cancer patient would respond to immunotherapy.

The research team from the National University of Singapore (NUS) that developed the tool calls it a "specially designed scorecard" that can be used with the standard blood test for cancer, also known as the liquid biopsy.

The "scorecard", which the team refers to as the Tumour Matrisome Index (TMI), is a panel of 29 selected genes produced in the extracellular matrix of the human body.

The extracellular matrix provides structural and biochemical support to surrounding cells "which acts like a scaffolding", said Prof Lim.

The NUS team found that the 29 genes appeared repeatedly as a consistent factor in patients diagnosed with non-small cell lung cancer (NSCLC), which accounts for approximately 85 per cent of all lung cancers.

Prof Lim noted that TMI can be used together with liquid biopsy, which is "less invasive and less painful" than conventional tumour biopsies. "As it requires only a blood test instead of day surgery, it can be done more frequently over the course of treatment, providing doctors with real-time information on how the patient is responding to treatment."

This allows doctors to track more efficiently how well the treatment is progressing. "It is a big step forward in personalising cancer treatment and ensuring better patient outcomes," Prof Lim added.

The NUS team's findings were published in two scientific journals last year - Proceedings of the National Academy of Sciences on Aug 15, and Nature Partner Journals' Precision Oncology on May 22.

Testing a person's TMI signature can determine if he has cancer or not. When the team studied the data of healthy individuals and cancer patients, they noticed that cancer patients had a higher set of TMI scores. 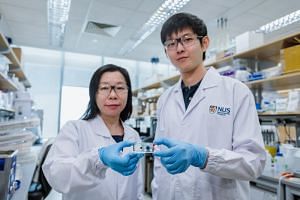 Currently, the TMI signature can diagnose only lung cancer. Further study is required for the other 10 cancer types.

The TMI scores can also be used to predict how well a patient might respond to cancer treatments such as immunotherapy, a process where the body's own cells are used to attack cancer cells. A patient's TMI scores can give a better gauge of his chances of survival, the team found.

In their work with NSCLC, they found that high TMI scores were consistently associated with early recurrence of cancer and metastatic spread, leading to an increased risk of death.

For cancers of the colon, liver, kidney and breast, the higher the TMI scores, the higher the risk of cancer recurrence or metastasis. This in turn means the patient's chances of survival are lower.

However, for stomach and ovarian cancers, the opposite is true - the higher the TMI scores, the lower the risk of cancer recurrence or metastasis, and the better the chances of survival.

Prof Lim and his team plan to work with clinical collaborators to conduct further clinical tests to validate the use of TMI on other cancer types.

"This will determine how accurate and specific TMI will be in the diagnosis and prognosis of patients via liquid biopsy," he said, adding that it is currently difficult to put a timeline on when this "scorecard" can be used in local hospitals, as more validation is required.

Dr Stefanie Jeffrey from the Stanford University School of Medicine said this study is useful as "it explores the impact of different components and features of the tumour micro-environment in influencing the biology of tumour cells shed into the circulation, which can affect patient outcome".

She added: "Importantly, it also explores the use of these features to develop predictive signatures that identify tumour responsiveness to immunotherapeutics and molecular targets against which drugs may be tested or new drugs developed."