SINGAPORE - A new study by researchers at the National University Hospital (NUH) is aiming to cure hepatitis B patients with low viral loads, or low amounts of the virus, by taking them off their medications and monitoring them closely.

Professor Lim Seng Gee, a senior consultant at the NUH department of gastroenterology and hepatology, who is leading the study, said stopping medication can allow the body's immune system to clear the virus on its own.

"If you are on medication for a long time, your body may not recognise the virus as foreign because it is being suppressed. When you stop treatment, the body can recognise a small flare-up and attack the virus."

But close observation is needed and not all patients can be taken off their medications safely, Prof Lim said.

He added that those who experience more severe flare-ups can see symptoms like jaundice and liver inflammation return, which can lead to liver cirrhosis or liver cancer. They will then will need to be put back on medication.

One of the 23 patients enrolled in the study since January this year, Mr Arfan Awaloeddin, 49, has already seen his viral load fall to zero.

This means Mr Arfan has been functionally cured of the virus since May, but he will continue to be observed for the duration of the three-year study, said Prof Lim.

An estimated 3.6 per cent of the population in Singapore aged 18 to 79 - about 180,000 people - are carriers of hepatitis B, the most common form of the virus here.

It is commonly transmitted from mother to child and through exposure to infected bodily fluids. Many do not feel unwell until the infection causes serious symptoms like liver inflammation.

Spontaneous cures are not unheard of. Between 2001 and 2018, 122 of the 2,368 hepatitis B patients seen at NUH were cured while on oral medications, Prof Lim said.

Most sufferers tend to be older as younger Singaporeans would have received the hepatitis B vaccine as children, he said.

Mr Arfan, who is the chief executive of the Rumah Sakit Awal Bros group of hospitals in Indonesia, said he was diagnosed with hepatitis B in 1992. His late father also had the virus, as does his younger brother. 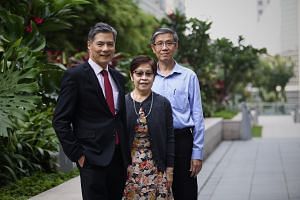 Improved cure rate for patients with hep B

Cure for hepatitis B around the corner

After receiving treatment in Indonesia and being on medication for nearly a decade, Mr Arfan decided to stop taking his medicine in 2001, without discussing it with his doctor, as he felt well enough. He said he had been spending the equivalent of $200 to $300 a month on the medicine.

But about three months later, his liver function deteriorated and he had to restart his medication.

"When Prof Lim suggested that I stop taking my medicine, I was very scared because of my experience from that time," said Mr Arfan, who has been receiving treatment in Singapore hospitals since 2006.

Those who are interested in taking part in the study can call the researchers on 6772-4447 to be screened.

Only patients found to have low viral loads below a certain level and who are relatively well will qualify for the study, which aims to enrol 150 patients and is scheduled to run for three years. Those with liver cirrhosis or cancer will not qualify.

The cut-off viral load level was derived from previous studies conducted in Greece, Germany and Hong Kong that found it to be a good predictor of success, Prof Lim said.

The study is funded by the National Medical Research Council, which provided a grant of $1.5 million.