A new technique for testing food known as the Glycaemic Index Speed Test (Gist) could make the process of developing healthier food products cheaper and faster.

The laboratory-based test determines a food's glycaemic index (GI), a measure of its impact on a person's blood sugar levels, using simulated digestion.

It can deliver results in one to two weeks at a cost of about $800 and was developed by the Food Innovation and Resource Centre (Firc) at Singapore Polytechnic.

"If the company is lucky, they may go through only three rounds, which will take about 15 months and a minimum of $9,000. But companies often undergo many rounds of reformulation," said Dr Lee. With Gist, firms can save 73 per cent in costs and the process can be shortened from years to months, he added.

He was speaking at Firc during a visit by foreign delegates, ending off the two-day Ministerial Conference on Diabetes yesterday.

Gist was one of several innovations used to support the "war on diabetes" in Singapore that were introduced to the delegates. 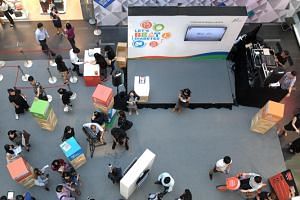 Global cost of treatment for diabetes set to double by 2030

The delegates also visited the new Ang Mo Kio Polyclinic and checked out its self-registration system, the eye and foot tests used in diabetes screening, and its automated medicine dispensing system.

The delegates were invited to sample a low-GI noodle created using Gist in the form of mee rebus.

Dr Lee said that under the conventional process, the noodle would be ready only by June next year.

Since this February, Gist has been used in 17 projects, including a low-GI sugar product known as Nucane, produced by Singapore-based food science firm Nutrition Innovation.

Its chief executive Matthew Godfrey said: "Natural cane sugar is full of antioxidants that are washed out in the refining process. If you leave them in, about 20 per cent less glucose goes into the bloodstream."

The company uses infrared scanning to check the composition of its sugar and tests its quality with Gist.

"We view the Firc as a key centre of excellence and expertise to help us combat diabetes and obesity in Singapore and around the world," said Mr Godfrey.

Dr Suzuki was impressed, calling the low-GI sugar "amazing". "I don't think we have this type of product in Japan. We would love to work with the company and with the Firc."