Farrer Park will control prices, as it seeks niche below top-end private hospitals

Due to be officially opened next month, it will control its prices and seek to attract "more amenable" specialists with a similar pricing philosophy. "Healthcare in Singapore is getting very expensive for both locals and foreigners," Dr Low said.

"We felt that we needed to provide good medical services to patients, at a price they can afford. 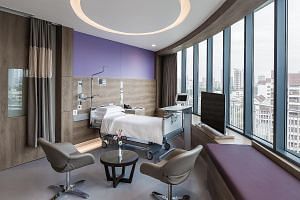 Dr Low, 54, said the consultation price for FPH's emergency clinic will start from a "very reasonable" $60, compared to most other hospitals which charge above $100 for their accident and emergency (A&E) services. Bed charges at FPH start at $251 for a four-bed ward, as compared with $276 at Mount Elizabeth Orchard.

On specialist charges, the hospital cited an example for angiography, a medical imaging technique, where the average bill size - made up of hospital charges and fees of a cardiologist at Farrer Park Medical Centre - is less than $5,000.

FPH said it is lower than the average bill in other private hospitals.

Dr Low said: "A few years ago, the Indonesians and Malaysians, for instance, would come and pay whatever rates we charged.

"Now, they will calculate and see if they can afford it, or if they should go elsewhere in the region."

He cited currency fluctuations as one possible factor in patients' decisions. He predicted that Singaporeans will make up about 50 per cent of FPH's patients, with medical tourists forming the rest. Dr Low, who was chief executive of Gleneagles Hospital from 2000 to 2006, has also worked in the pharmaceuticals and medical devices industries.

FPH, designed to hold 220 beds, is opening its wards in stages.

It has hired nearly 600 staff and this will increase to 800 when all the wards are fully operational, likely by the end of the year.

Dr Low said: "The nearest (A&E services) at Tan Tock Seng Hospital and KK Women's and Children's Hospital are among the busiest A&Es in Singapore, and we think we can alleviate some of the load."

The $800 million complex is equipped with the latest smart systems. Doctors, for instance, have electronic tablets and phones linked to the hospital systems. They can get real-time updates of their patients' scans and test results, and can order medication on the go.

"Technologically, we are equipped to enable the smooth flow of information to all stakeholders," said Dr Low. "The hospital is future-built for the next 20 years."