SINGAPORE - A new dental research institute has been set up to tackle Singapore's teething issues.

A 2016 survey found that almost one in three Singaporeans aged 60 and above - or 31 per cent of the age group - was totally toothless.

This is considerably higher compared to other developed nations, where only 17 to 20 per cent of the same age group have no teeth at all.

To address this problem, the National Dental Research Institute of Singapore (NDRIS), launched on Monday (Nov 4), aims to drive oral health research in Asia and translate scientific findings into applications that can benefit the local and regional communities.

These include creating new dental devices with the help of technology. Examples are dental plugs constructed using a 3D printer to temporarily replace a dental implant, and micro-needles for injection that will speed up the procedure and reduce pain.

Associate Professor Goh Bee Tin, director of research and education at NDRIS, said not knowing enough about oral hygiene, a high-sugar diet and misconceptions about how long our teeth should last are reasons why toothless smiles are common among the silver-haired in Singapore.

"The issue here is that most people go to the dentist only when there is a problem, such as a toothache. By then it's already too late," she told The Straits Times.

False ideas about dental health also play a part, she said. The older generation "may think that extraction is the only way to treat or get rid of dental diseases and that it is inevitable that your teeth will decay and have to be extracted as you become older, but it's not true", she said.

Prof Goh cited the example of Sweden, where the average number of teeth that a 80-year-old has is 25. Singapore pales in comparison, with only 9 per cent of those aged 80 and above having 20 teeth or more. An adult, on average, has 28 to 32 teeth for a full set of teeth.

The new institute will study microorganisms in the mouth of elderly patients to see how they differ from younger patients. 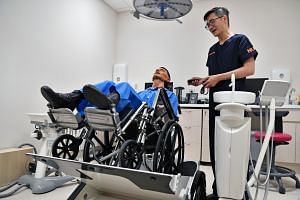 How often should you see your dentist?

Dentists upset over talk of more training required for some procedures

"A lot of times (the elderly) have dry mouth as there is a reduction in the saliva flow. That may change the profile of the microorganisms," said Prof Goh.

"At the moment, it is sort of like a one-size-fits all - all dental diseases are treated the same way. But through advanced technologies like through studying the microbiome or the microorganisms in the future, we may be more able to tailor the treatment for specific segments of the population," she added.

Toothless smiles and aesthetics are not the only consequence of dental decay, researchers that The Straits Times spoke to noted.

Scientific evidence has pointed to the link between tooth decay and systemic diseases such as diabetes, heart disease, cancer and pregnancy complications.

"The saliva actually reflects the general health of the person," said Professor Jaya Seneviratne, principal investigator at the NDRIS.

"Gum disease is actually an inflammation of the mouth. It releases inflammatory components, such as bacteria, into the system's circulation. The bacteria can enter the bloodstream and traverse to other organs in the body, causing a lot of complications."

NDCS's research programme has been conducted since the 1990s and was formalised in 2014 under the SingHealth Duke-NUS Oral Health Academic Clinical Programme (ACP).

Over the past five years, the ACP has signed three memorandums of understanding and five research collaboration agreements worth over S$5 million with various institutions such as Nanyang Technological University.

One of the projects that scientists in NDRIS are working on is the development of a micro-needle patch that can replace conventional needles used to administer anaesthesia during dental procedures.

Said research fellow Razina Seeni Syed: "Most patients who walk in for dental procedures such as tooth extraction often will have issues such as dental anxiety and phobia due to the long (anaesthetic) needles, which cause a lot of pain.

"The motivation of our project is to develop an alternative method that can deliver this anaesthesia painlessly."

The micro-needles create small holes on the gum, which will be used to deliver anaesthesia to the nerves in the jaw bone that supply sensation to the teeth. A low-voltage current is used to accelerate drug delivery.

The entire process takes about five minutes, compared to about 10 minutes for a normal anaesthesia- administering procedure.

The team hopes to get the micro-needle patch out on the market by end-2023.