The Ministry of Health (MOH) consulted the public and industry players over eight weeks starting last December on four proposed measures to cut the consumption of high-sugar drinks.

The four measures were mandatory front-of-pack labelling, regulation on advertising, a sugar tax, and a ban on high-sugar sweetened beverages.

After getting feedback from more than 4,000 people, experts and industry players, the ministry plans to implement two of the measures, while keeping its options open on the other two, which it said needs more study.

Mandatory front-of-pack labelling indicating the health value of the drink received the greatest support, with 84 per cent of respondents in favour.

The drinks industry suggested that if labelling had to be done, then the labels should indicate just the content - in other words, very much like what is seen on drinks today, but placed on the front.

Members of the public and experts preferred an "interpretive" label. They want to know if the drink is healthy, neutral or unhealthy, and not have to work at calculating how healthy the drink is.

The ministry has decided to go with what the people want. More than 30 countries already have such labels for drinks. 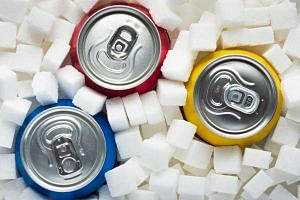 War on diabetes: New moves in the right direction, but faster implementation needed

But it wants a label that will resonate with the local population, and thus, will be having further consultation on what the label will look like. The label will apply to both imported as well as locally produced drinks.

The other proposal it will go ahead with is to ban the advertising of drinks in the very unhealthy category.

For this, the industry preferred the current, self-regulated approach. But 71 per cent of people were for such a ban, which they also said would prevent misleading advertising or loopholes.

MOH has yet to fix the level of sugar that merits a total ban on advertising.

About 65 per cent of people were in favour of putting a tax on high-sugar drinks. The majority preferred a tiered tax system, with higher tax on drinks with more sugar.

There were two concerns with this. Experts said the tax will have to be significant to have an impact. There was also the fear that manufacturers will spread the tax across drinks, thus negating the purpose of the tax.

The fourth proposal, to totally ban drinks with high sugar content, received support from less than half the people, largely because it deprives people of choice. The industry also opposed it, saying that it is too harsh and disproportionate to the harm from sugar-sweetened beverages.

A version of this article appeared in the print edition of The Straits Times on October 11, 2019, with the headline 'Most favour having labels on front of drinks packs'. Subscribe
Topics:
More
Whatsapp Linkedin FB Messenger Telegram Reddit WeChat Pinterest Print Purchase Article Copy permalink