With the move to provide a breakdown of private sector operation fees, the hope is that surgeons will be more mindful about how much they charge their patients.

Ms Tin Pei Ling, who is on the Government Parliamentary Committee for Health, said: "It does not mean that surgeons cannot charge above the norm, but then they will have to give patients a full and proper explanation."

The public can now see how much private sector surgeons charge for a range of common procedures.

Dr Lee Hung Ming, a private ophthalmologist, said making fees more transparent is the right step forward. He said: "It provides not only local patients but also foreign patients with sufficient data and information on the range of fees charged by the majority of surgeons and hospitals in Singapore for commonly performed operations.

"This transparency... will help enhance Singapore's reputation as a regional medical hub."

But making the information public has its limits in keeping prices down, said those interviewed.

For one thing, the data given is just a broad range. 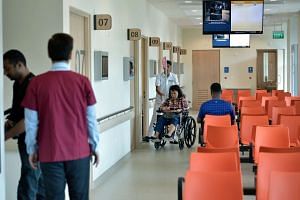 Mrs P.K. Sandhu, 49, a mother of three, said it was good to know how much doctors are charging but it might not be that useful.

Knowing the range of fees surgeons charge does not help in finding a particular one whose fees are reasonable, she said. She added that if she trusted a surgeon, she would be willing to pay a bit more: "If his fees are way higher than the range given, I would ask for an explanation. If he gives me a good answer, I would stay with him."

The Singapore Medical Association (SMA) said it has always advocated more transparency on charges, but added: "It is too early to tell if this will have any impact on healthcare costs."

It noted that the data is based on actual fees charged and is not a guideline. SMA had previously offered guidelines but later removed them due to anti-competition issues.

The association added yesterday that there are individual variations in disease severity as well as other factors that may add to the complexity of a case and, thus, the fees charged. "In addition, patients must take into account the experience and expertise of the treating doctor," it said. "MOH (Ministry of Health) should monitor the situation carefully over the next few months before we think of publishing other data."

Ms Tin said the initiative was "a positive step in the right direction in helping patients make more informed decisions", and is useful to people who do not have a particular surgeon in mind and are not "super rich", but who want to opt for surgery in a private hospital, she said.

"Looking ahead, one suggestion is to have the list of medical conditions expanded, potentially including non-surgical types."

Fees at a glance