SINGAPORE - Thirst for bottled water here is growing, according to data from research firm Euromonitor International.

Here are eight things to know about bottled water in Singapore:

Singapore consumers spent $134 million on it in 2015 - nearly 24 per cent more than in 2010, says Euromonitor International.

At least 12 brands of bottled water are sold in Singapore. And more brands have recently been added to the shelves, including two brands of alkaline water which were introduced at the Sheng Siong supermarket chain in 2016.

The Agri-Food and Veterinary Authority of Singapore (AVA), which regulates the import of bottled water into Singapore, classifies brands into five types, based on the source and the way the water is treated.

According to national water agency PUB, tap water can be 1,000 times cheaper than bottled water.

A 600ml bottle of drinking water costs between 50 cents and $1, while tap water costs 0.1 cent for the same amount.

5. Is it better for health?

Alkaline water has a higher pH level than regular drinking water. Some advocates of alkaline water said it can neutralise the acid in your body.

While normal drinking water generally has a neutral pH of 7, alkaline water has a pH of 8 or 9. There have been claims that alkaline water can help slow the aging process, and even prevent diseases like cancer.

According to a study published in the BMC Public Health journal in 2004, water with minerals was found to lower the blood pressure of people with low urinary excretion of magnesium or calcium. 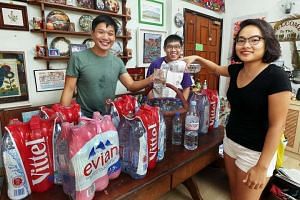 The truth about bottled water

People who drank mineral-based, alkaline water were also found to be better hydrated, said a study conducted in 2010 by a Montana State University professor and his team.

In addition, an in-vitro laboratory study published in Sage Journals in 2012 suggested that alkaline water could be good for patients with a reflux condition.

However, experts told The Straits Times that more conclusive results are needed to support claims that alkaline water and oxygenated water are better for health.

While some elements such as arsenic, can be beneficial in tiny quantities, Dr Wuang notes: "Some minerals, like fluoride, may also be present in quantities that are not acceptable to certain groups of people."

These include infants and young children, who already get fluoride that is added to tap water.

A 2012 study by the Harvard School of Public Health found that children in high-fluoride areas had significantly lower IQ scores than those who lived in low-fluoride areas.

Associate Professor Richard Webster from Nanyang Technological University's School of Physical and Mathematical Sciences said that water marketed as artesian or untouched by humans is not better, describing it as a "marketing gimmick".

"There is no real difference from other bottled water," he said, adding that the benefits of water with added oxygen are also unproven.

8. Bad for the environment

Plastic bottles take more than 1,000 years to biodegrade and they also produce toxic fumes if incinerated.

It also takes an estimated 3 litres of water to package a 1-litre bottle.

For the full article, visit http://str.sg/46au