SINGAPORE - Lower-sugar desserts, drinks and sauces will be making their way into eateries, as part of the Government's efforts to fight diabetes.

More food manufacturers are creating products that skimp on refined sugar but use natural sweeteners such as stevia as a supplement to avoid compromising on taste.

This is thanks to the Healthier Ingredient Development Scheme, launched in July last year (2017) to encourage manufacturers to create healthier staple foods, such as wholegrain rice and noodles.

The scheme was extended in May to support the production of lower-sugar desserts, sauces and beverages, as part of the Health Promotion Board's (HPB) efforts to cut the added sugars in Singaporeans' diet by 25 per cent by 2020.

Since then, four manufacturers have tapped the grant to develop and market lower-sugar products, which include mooncakes, ice cream and Asian beverages.

Giving an update on the scheme on Wednesday (Aug 15), HPB chief executive Zee Yoong Kang told reporters that the scheme has supported 26 grant applications, totalling about $7 million, since its launch. This is a fifth of the $35 million in funding to be disbursed over three years.

More than 50 healthier products are now available at some 3,000 food and beverage outlets across the island, though more must be done to reduce the consumption of sugary food and drinks, particularly in the food services sector, he said.

On the the use of sugar substitutes, he said: "People go for desserts and sweet drinks because they want the sweet taste. We want to offer the option so they don't have to compromise on the sweetness but have less health impact."

"We want to spread the message (to F&B operators) that by joining the healthier foods trend, you're going to increase your sales because people out there want these options," Mr Zee said, adding that the HPB is pushing to get more hawkers to come on board.

He was speaking on the sidelines of a media tour of Chinese restaurant chain TungLok's production facility in Sembawang.

TungLok tapped the grant to develop mooncakes that have about 30 per cent less sugar and calories, and 40 per cent less saturated fat. This means that one of its mooncakes now has about seven teaspoons of sugar, instead of 10 previously. Some of the refined sugar has been replaced with allulose, a low-calorie and low-glycaemic index sugar found naturally in fruits.

About 80 per cent of the mooncakes now sold at its restaurants are lower in sugar.

TungLok's chief executive Andrew Tjioe said that it took about nine months and more than 20 rounds of trials and taste tests to develop the healthier version, which he said tastes better than the traditional mooncakes the firm has been manufacturing for 30 years.

Boxes of its mooncakes are between $2 and $4 more expensive this year, though Mr Tjioe said this is mainly due to packaging costs.

A lower-sugar version of the restaurant's nian gao, or sticky rice cake, was introduced earlier this year, and sales have increased by 30 per cent, he said.

"This means that the market is ready to accept this lower-sugar option as long as you give them something that doesn't compromise the sensory experience," said Mr Tjioe, who added that efforts are ongoing to further reduce the sugar content in its mooncakes as well as in all desserts at TungLok restaurants.

Local manufacturer Faesol, which produces a range of ready-to-mix Asian beverages including water chestnut and roselle tea that contain about half the amount of sugar compared to the same syrup-based drinks, also received a grant from the scheme.

The firm's chief executive Saw Lin Kiat told The Straits Times that there are plans to expand its distribution to about 200 more locations over the next year, including coffee shops, cafes and restaurants.

The powdered products, which replaced some of the refined sugar with sweeteners like stevia, may cost consumers up to 20 cents more a cup, as it is more expensive than low-cost flavoured syrups that are high in sugar.

But Dr Saw, who holds a Phd in chemical engineering, believes that it is a price consumers are willing to pay. 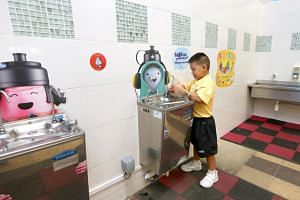 Are sugar substitutes the answer to Singapore's war on diabetes?

"The operators are often worried that they will lose sales if they switch to low sugar... we want to let them taste and see that it's the same," he said.

Better4U, which sells gelato under the Sugalight brand and manufactures ice cream for F&B clients, was founded in 2012 to serve diabetics, said owner Elgin Tan. Its Sugalight range uses sweeteners such as xylitol.

"My dad is diabetic but loves his sweet stuff and always got scolded by the doctor for his sugar intake. There were very few ice cream substitutes in Singapore, so I decided to create my own," said Mr Tan.

Business was slow at the start, as people were reluctant to change their eating habits, he said. But it has since picked up.

"In the beginning, our customers were mainly diabetics and the neighbouring community, but over time we've managed to build a following."