This reflects an improvement on Singapore's 90-90-90 results based on targets set by the United Nations, said Dr Khor at the Singapore Aids Conference 2018 held at the Lee Kong Chian School of Medicine auditorium.

Viral load suppression is defined as having fewer than 200 copies of HIV per ml of a person's blood. If the load falls below 50 copies per ml, it is considered undetectable and untransmissable.

Based on the latest data from 2013 to 2015, the number of people with HIV in Singapore who know their status has risen from 69 per cent to 72 per cent. This figure is derived from a statistical estimate of the number of undiagnosed cases.

"Even though the numbers are encouraging, we can and must do more to help people living with HIV," said Dr Khor. 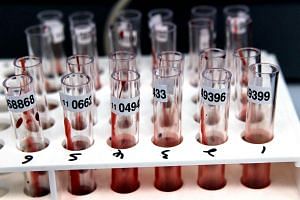 265 new cases of HIV infections reported from Jan to Oct, down from same period in 2017: MOH

Decoding the life of an HIV patient

From January to November this year, 231 people were given prescriptions for PrEP at the DSC Clinic, including 181 Singaporeans and 50 non-Singaporeans, said Dr Yeo.

This is more than twice the 99 cases that were seen for the whole of 2017.

PrEP, which first became available in Singapore in 2016, is a drug that has been shown to be highly effective in preventing HIV infection. In Australia, the total number of diagnoses fell from 365 in 2016, when PrEP was first implemented on a large scale, to 241 in 2017, said Monash University professor of public health Christopher Fairley.

In Singapore, new cases of HIV infection may also be on the decline. On Dec 1, the Ministry of Health said that there were 265 newly diagnosed cases of HIV in Singapore from January to October this year, down from 361 cases over the same period last year.

But Dr Yeo said that a significantly wider roll-out and uptake of PrEP is needed among high-risk groups, including men who have sex with men and men who frequently visit sex workers, in order to have a greater impact on HIV infection rates.

Several barriers still remain before Singapore can achieve its goal of eliminating HIV by 2030, he added.

Truvada, the brand of PrEP available here, is still expensive for many patients, with a month's dosage costing about $400.

Generic versions of PrEP can be imported for personal use at about one-tenth of the cost, but only up to three months' supply at once. Clinics like the DSC Clinic offer patients guidance on how to find reliable suppliers online, said Dr Yeo.

Stigma and a lack of understanding about HIV also remain key issues.

Prof Fairley said that PrEP use in Australia was correlated with lower rates of condom use, which led to an increase in the incidence of other sexually-transmitted infections which PrEP does not prevent.

"Safe sex practices including use of condom remains a cornerstone of HIV prevention even with PrEP use," said Dr Yeo.