SINGAPORE - The Government will lift the age limit of 45 for women to undergo in-vitro fertilisation (IVF), and will allow some co-funded treatments to be started at a later age.

The number of assisted reproduction technology (ART) cycles a woman can undergo will also no longer be capped, said Senior Minister of State for Health Amy Khor on Wednesday (Aug 28).

At present, a woman is allowed to undergo only a maximum of 10 cycles up to the age of 40, and five cycles after that age. ART treatments include IVF.

Currently, the Government co-funds up to six ART cycles only for women who begin a cycle before turning 40.

There is no subsidy for those undergoing intra-uterine insemination (IUI) procedures, which involve inserting a prepared sperm sample into the uterus, close to the time of ovulation.

From Jan 1, 2020, up to two of the six cycles can be carried out when the woman is 40 or older, as long as the couple had tried ART or IUI procedures before the woman was 40.

The move is in the light of the trend of later marriages, such that more couples may need help conceiving, said Manpower Minister Josephine Teo, who also oversees population matters. 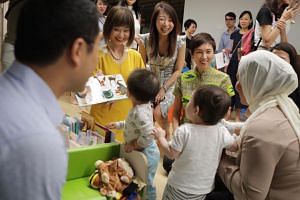 Daily stress not in the way of baby plans, study says

Most couples in Singapore not aware of fertility issues; 7 in 10 believe assisted reproduction is a 'magic bullet'

She was speaking at a press conference on marriage and parenthood which was also attended by Minister for Social and Family Development Desmond Lee.

Other major announcements covered increases in pre-school subsidies and in government-supported pre-school places.

For ART treatments, the newly eligible couples will receive co-funding of up to $7,700 per fresh cycle and $2,200 per frozen cycle, for three fresh cycles and three frozen cycles, provided the woman is medically assessed to be fit to carry a pregnancy to term.

The subsidy amounts was increased by at least $1,000 per cycle in April last year.

The amount given depends on the citizenship status of the couple, with more support given if the couple are both Singaporeans, and less if one half is a Singapore permanent resident or of a foreign nationality.

The removal of the age limit and cap on number of ART cycles is due to reduced medical risk for older women as medical technology advanced, said the Ministry of Health.

The Government will also be introducing co-funding for IUI procedures, which are less invasive than ART treatments.

Currently, those attempting assisted conception procedures such as IUI can withdraw up to $15,000 from Medisave.

About 2,000 cycles are attempted by Singaporean couples each year, with the average cost per cycle at about $1,300.

From Jan 1, 2020, eligible couples undergoing IUI treatment at public assisted reproduction centres will get assistance of up to 75 per cent, capped at $1,000 per treatment cycle, for a maximum of three cycles.

To qualify for this co-funding, women have to be under 40 years of age at the start of the IUI cycle, and couples have to be assessed by doctors at a public assisted reproduction centre to be suitable to try IUI prior to ART treatment.

Similar to the ART treatment co-funding, one half of the couple must be a Singapore citizen to be eligible.

Mrs Teo encouraged couples who wish to raise a family to start trying for a baby earlier, as fertility treatments do not always lead to a successful conception.

By end-2020, childhood vaccinations and developmental screenings will be more accessible and affordable, said Dr Khor.

Currently, there are subsidies for selected National Childhood Immunisation Schedule (NCIS) vaccinations - targeted at diseases with high outbreak potential such as measles, mumps and rubella, and Haemophilus influenzae type b - at polyclinics.

Out of all vaccinations under NCIS, those against pneumoccocal disease and the human papillomavirus (HPV), which are for personal protection, are not currently subsidised at polyclinics.

Before end-2020, subsidies for these will be rolled out in polyclinics as well as Community Health Assist Scheme (Chas) general practitioner clinics, of which there are about 1,000.

HPV jabs have also been offered to Secondary 1 female students as part of the subsidised school-based health programme since April this year.

Exact subsidy numbers will be announced at a later date.