The number of measles cases worldwide quadrupled in the first three months of the year, compared with the same period last year, but the infectious disease is well under control in Singapore.

There were 43 measles cases in the first 15 weeks of the year, but the Ministry of Health (MOH) said there is no evidence of further spread in the community.

Most of the cases were single and sporadic local infections, except for five separate instances of transmission to a family member or close friend, the ministry added.

Measles, which affects the respiratory system and often results in a skin rash, is highly transmissible among people who have not been vaccinated.

An infected person can transmit the virus to about 15 to 20 others who are not immune to measles, said Professor Leo Yee Sin, executive director of the National Centre for Infectious Diseases.

"Hence, we need more than 90 per cent of people in the community with immunity against measles in order to break the chain of transmission," she added, encouraging people to get vaccinated.

The World Health Organisation (WHO), which announced the global rise in measles cases last Monday, said this follows consecutive increases over the past two years. "While this data is provisional and not yet complete, it indicates a clear trend. Many countries are in the midst of sizeable measles outbreaks, with all regions of the world experiencing sustained rises in cases," the WHO added. 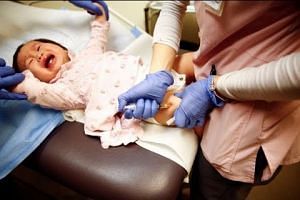 Spike in measles cases since start of year

WHO warns of 'backsliding' in measles fight as cases soar

Dr Nicholas Chew, an infectious disease specialist at Farrer Park Hospital, said the problem lies with significant populations around the world not getting vaccinated. "Effective vaccination programmes are severely hindered by factors including complacency, misinformation about vaccine efficacy and safety, anti-vaccine scare-mongering, poverty, war and conflict," he added.

The vaccine also mitigates the risk of virus-induced neurological complications and death, which - although rare - can occur up to 20 years after the primary infection clears, noted Assistant Professor Danielle Elizabeth Anderson from the Emerging Infectious Diseases Programme at Duke-NUS Medical School.

In Singapore, the vaccination is compulsory by law for all children living here, while the National Adult Immunisation Schedule also advises people who have not been vaccinated to do so.

While the risk of a measles outbreak here is low because of the population's high vaccination rates, the country remains vulnerable due to its position as an international travel hub and the cosmopolitan make-up of its residents, said Dr Chew.

The MOH said it will continue to monitor the situation closely and has alerted general practitioners to look out for cases of measles, especially among patients who have recently travelled overseas or who have not been vaccinated, and to notify the ministry promptly.

It advises Singaporeans to get vaccinated if they are travelling to areas with measles outbreaks, observe good personal hygiene at all times, and seek medical attention promptly if they feel unwell.