His 43-year-old wife Mrs Cathryn Sim, was told that her husband "was infected by the Group B Streptococcus (GBS) bacteria, which led to meningitis".

She told The Straits Times: "He opened his eyes slightly but he was still very weak. In the afternoon, he suffered a seizure and the doctor had to put him on anti-seizure drugs and sedation, so now he is still in a highly unconscious state." 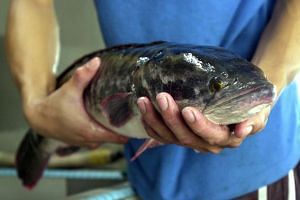 GBS bacteria found in two types of fish: What you need to know about them 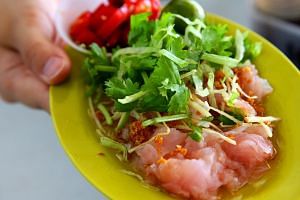 The couple visited a fish porridge stall at Tiong Bahru Food Centre on Nov 15 after Mr Sim had returned from a work trip to the Philippines.

Said Mrs Sim: "The pain from his headache felt so intense, it was like his brain was fully infested with the bacteria. It got to a point where he was in a complete state of confusion and I saw my husband, who is an intelligent man, reduced to such a terrible state."

Mr Sim was rushed to the hospital in an ambulance last Thursday after his legs swelled up and he almost lost consciousness.

GBS is a common bacteria found in the gut and urinary tract of 15 to 30 per cent of adults without causing disease in healthy individuals.

However, it may occasionally cause infections of the bloodstream, skin and soft tissues, joints, lungs and brain.

Mrs Sim said that her husband stopped eating raw fish in July after reading about the spike in GBS infections in news reports.

But he decided to have the dish that day after seeing a long queue at the stall, which he had eaten from four times before.

About 18 years ago, Mr Sim fell unconscious and was hospitalised after eating medium-rare beef while on holiday in the United States.

Calling it a "miracle", Mrs Sim said that her husband regained consciousness after five days on his birthday. However she is unsure whether he will have similar luck this time.

She said: "The doctors have told me that chances of recovery are low. It takes more than a miracle. I only have one husband and he is my life. I will spare no efforts in finding out what exactly happened to him. I don't hope to have another casualty because one life is really one too many."

A KTPH spokesman said the hospital is still reviewing the case

In August, MOH said its investigations found an association between GBS infection and the consumption of raw fish sold at food stalls.

It added there had been a "significant downtrend" in the number of GBS cases since mid July, after licensed shops and foodstalls were advised to stop selling raw fish dishes using Song fish and Toman fish.