A janitor who works at Raffles City Tower and One Raffles Quay is one of three unlinked Covid-19 cases in the community yesterday.

The 50-year-old woman, who is employed by Campaign Complete Solutions, is asymptomatic. She received her first dose of a Covid-19 vaccine on May 1, and the second dose on May 29.

Her infection was detected when she was swabbed on Thursday as part of surveillance testing for mall cleaners. She tested positive on the same day.

The second unlinked case is a promoter who works at Guardian in Ion Orchard shopping mall.

The 57-year-old woman had developed a dry throat on Monday but did not seek medical attention until Thursday, when she had earache.

She went to a polyclinic and took an antigen rapid test and a polymerase chain reaction test. She tested positive for Covid-19 in both tests on Thursday.

The Ministry of Health (MOH) said yesterday that Ion Orchard will be closed to the public for four days from today for cleaning, after three people who worked at the mall tested positive, including the promoter and a retail assistant at Four Leaves bakery.

The mall will reopen next Wednesday.

Staff who worked at the mall from May 28 will be tested. Free testing will also be offered to members of the public who visited the shops or used the services or facilities at the mall between June 3 and June 11.

MOH said: "Individuals who had only walked through the mall to connect to neighbouring buildings or Orchard MRT station need not be tested."

All visitors to the mall between June 3 and yesterday are advised to monitor their health closely and minimise social interactions as far as possible for 14 days from the date of their visit, MOH said.

The third unlinked case yesterday is a 38-year-old Indonesian sea crew member who works on the tugboat Marina Ariel.

He developed a fever on Monday, and a loss of smell and taste on Wednesday, followed by headache and chills on Thursday.

He reported his symptoms on Thursday and was taken to a hospital. He tested positive yesterday.

Before that, he had not disembarked from the vessel.

No cases were reported in workers' dormitories. 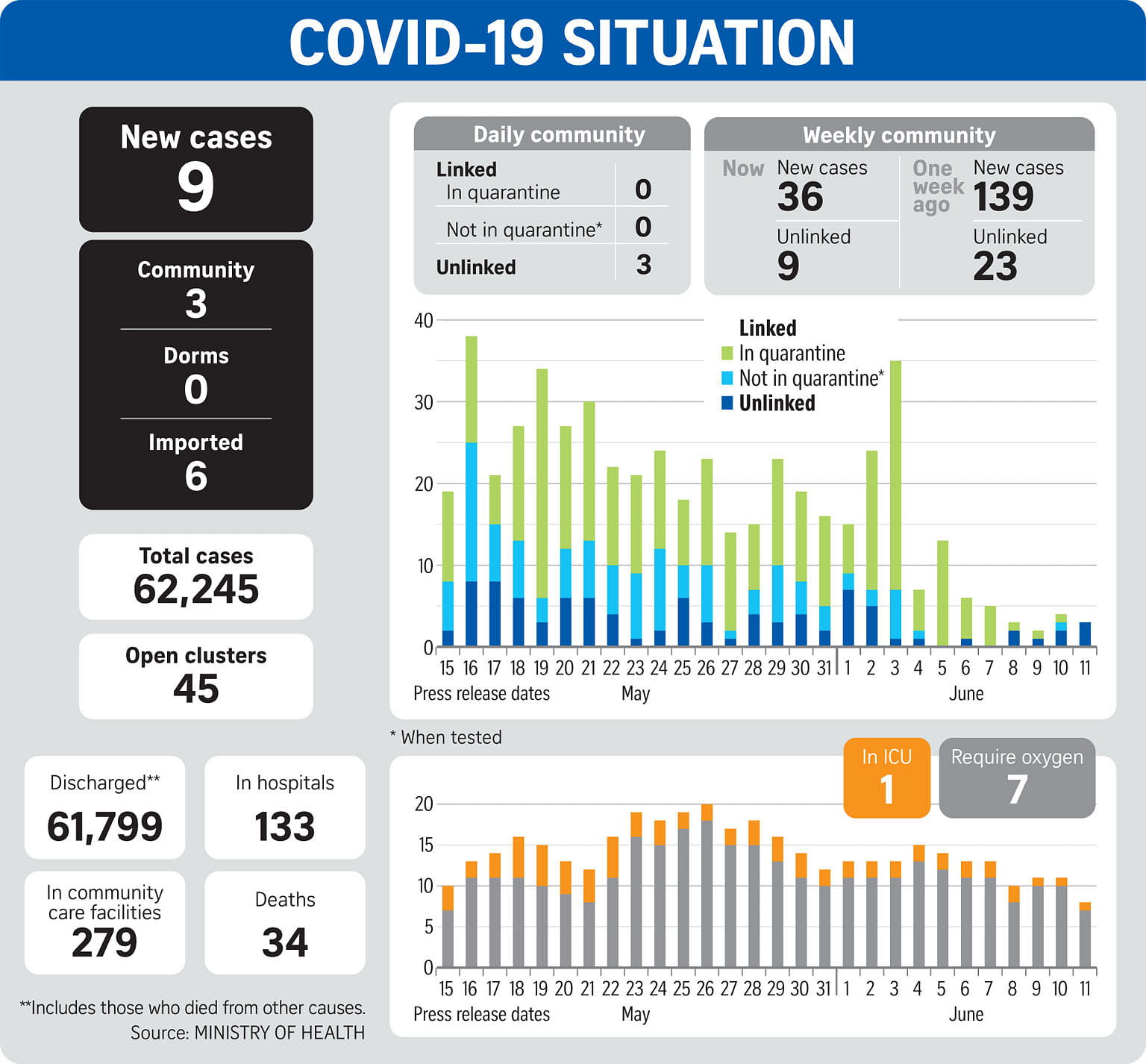 There are 133 cases in hospital, with one in the intensive care unit. Another 279 cases are being isolated and cared for at community facilities.

Thirty-four cases were discharged from hospitals or community isolation facilities yesterday, bringing the total number of those here who have fully recovered from the virus or died from unrelated cases to 61,799.

There have been 34 deaths in Singapore from Covid-19 complications, while 15 who tested positive died of other causes.