SINGAPORE - Judges have no answer yet to whether a woman who conceived a baby with a stranger's sperm in a fertility treatment mix-up is entitled to damages for bringing up the child.

A five-judge appeal court explored various legal issues raised in the case on Oct 6, but ended with no conclusion.

In her negligence suit against Thomson Fertility Centre, its parent company Thomson Medical, and two embryologists, the woman sought damages for various categories of claims, including for the upkeep of the child, known as Baby P in court proceedings.

Here is a recap of the case of Baby P:

A couple - a Singaporean Chinese woman and her Caucasian permanent resident husband who are both in their early 30s - had sought fertility treatment at Thomson Fertility Centre, which is part of the medical centre at Thomson Road. The couple, who had been married for about 10 years, had approached the centre on the advice of their obstetrician.

In 2007, the couple went to the centre for fertility treatment and had a son. The treatment they underwent involved retrieving eggs from the wife and fertilising them with sperm from the husband in a laboratory, before transferring the eggs back into her uterus.

The couple wanted more children and underwent a second treatment in January 2010. The wife gave birth to a baby girl on Oct 1 that year, about 15 days before the due date, following an emergency caesarian operation.

When did they discover the mix-up?

When the baby girl was born, the couple noticed that the child's complexion was noticeably different from theirs. Two days later, they were told that the baby has type B blood, which raised their concerns because the couple have blood types A and O.

They asked the medical staff about this, but did not get satisfactory answers initially. They were later informed that there was a possibility that a mix-up could have taken place. A DNA test revealed the baby is biologically related to the woman, but not to her husband.

What resulted in the mix-up?

Lapses in procedure and human error were the reasons behind the mix-up of sperm used in the IVF treatment, Health Minister Khaw Boon Wan said in Parliament in November 2010.

At the time of the incident, the embryologist was processing semen specimens of two individuals at the same workstation at the same time.

The pipette used for transferring the specimen was reused, instead of being discarded after each step. Even though it was reused only for handling the specimens from the same individual, it unnecessarily raised the risk of human error.

There was also no second person to counter-check that the specimens were transferred to the correct receptacles at every critical stage.

Mr Khaw did not give further details on how the mistake actually took place.

What steps were taken following the mix-up?

To eliminate the risk of any mix-up, assisted reproduction centres were required to follow procedures in accordance with international best practices.

First, the embryologist will work on the specimens of only one individual or one couple, at one workstation at a time.

Second, he will carefully label all the receptacles and instruments with the couple's or the individual's name.

Third, he will discard disposable instruments such as pipettes after each use, to avoid any contamination.

Fourth, at every critical step, a second operator will counter-check that the specimens are transferred to the correct receptacles. 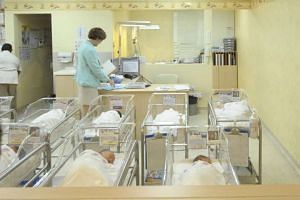 What action was taken against the hospital?

Thomson Medical Centre was fined the maximum $20,000 in June 2011. A representative of the company pleaded guilty to failing to ensure suitable assisted reproduction practices were followed.

The Health Ministry also suspended all new assisted reproductive activities at the centre in November 2010 following the botched IVF procedure.The suspension was lifted after eight months in June 2011.

Who filed the current lawsuit?

In 2012, the child's mother filed a lawsuit against Thomson Medical, its fertility centre and two embryologists over the mix-up in sperm samples.

She sought damages for various categories of claims, including for the upkeep of the child, known as Baby P, in court proceedings.

The upkeep expenses included her pre-school needs in Beijing where she was living with her parents at that time, further education in Germany, her father's home country, as well as daily necessities until she is financially self-reliant.

However, ahead of the assessment of damages, the defendants asked the High Court to give a ruling on the preliminary question of whether Singapore law allows damages to be awarded for the upkeep of a healthy child.

In January 2015, Justice Choo Han Teck disallowed the claim, noting that there were "cogent policy considerations" against finding liability for upkeep. "Baby P should not ever have to grow up thinking that her very existence was a mistake," he had said.

The woman appealed and the case was heard in August 2015.

Senior Counsel N. Sreenivasan, who represented the woman, argued that her loss was the unwanted pregnancy in which she gave birth to a child with a stranger's DNA, when she and her husband had contemplated raising only a child who was biologically their own.

Senior Counsel Lok Vi Ming, who represented the defendants, argued that the cost of raising the child was not a loss arising from the defendants' conduct; the woman had wanted a child and contemplated incurring expenses to raise one.

Mr Lok noted that the courts do not recognise damages for the ordinary upkeep of a child, on the basis that the birth of a healthy child was "a blessing".

The case was adjourned for further arguments, which were heard on Oct 6, 2016.