SINGAPORE - Eight brands of ranitidine medicines - used to treat patients with conditions like heartburn and gastric ulcers - were removed from Singapore shelves for containing a cancer-causing agent.

In an update on the Health Sciences Authority's (HSA) website on Monday (Sept 16), the authority said the medicines were found to contain a nitrosamine impurity, N-nitrosodimethylamine (NDMA), in excess of the internationally acceptable level.

HSA's order to stop the sale of these ranitidine medicines comes amid similar moves worldwide, as recent medical studies found that prolonged exposure to doses of nitrosamine impurities that are much higher than levels people are usually exposed to could cause cancer in animals.

Nitrosamine impurities have also been found to be formed unexpectedly during the manufacture of some medicines.

HSA noted that this was a precautionary measure. 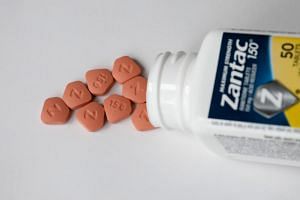 The authority said that patients who have been prescribed the affected medicines for short-term use can continue to use them. This is because the international criterion used to assess whether an affected medicine is safe or not is based on its effects if a person were to take it every day for 70 years.

Generally, ranitidine is prescribed for short-term use of a few days to a few weeks, and used only when necessary.

HSA added that there are other medicines that can be used as alternatives, and patients who have questions can speak to their doctor or pharmacist.

The authority added that it is working with the companies supplying these medicines and international regulatory agencies to verify the causes of the nitrosamine contamination, and to identify the necessary measures to address the issue.