SINGAPORE - By 2020, the Health Promotion Board (HPB) aims to get Singaporeans to cut their sugar intake by nearly a quarter, as well as include more unrefined carbohydrates, such as wholegrains, in their diets.

HPB said on Tuesday (Feb 6) that it is also drawing up a set of guidelines for food manufacturers to reduce the amount of sugar used in sauces, desserts and sweet drinks.

This latest development in the war against diabetes comes half a year after seven drink companies pledged to reduce the sugar in their beverages to 12 per cent by 2020.

Currently, refined carbohydrates - including starchy staple foods such as rice and noodles, as well as cane sugar - make up the bulk of an average person's carbohydrate intake.

Of the refined carbohydrates a person eats, sugar makes up 22 per cent of the intake. HPB is hoping to bring this down to 17 per cent.

The board also hopes to increase the proportion of unrefined carbohydrates - which include wholegrains - that people are consuming from 17 per cent to 35 per cent.

"Our bodies really do not need any carbohydrates from added sugar," said Dr Annie Ling, who is director of HPB's policy, research and surveillance division. "Over the years, Singaporeans have just become more used to less sweet drinks. We hope to replicate this for desserts and sauces."

To tackle the sugar problem, the board is looking at ways to replace cane sugar with other natural alternatives such as isomaltulose and allulose. These sugars can be found in fruits and vegetables, including sugar beets, figs and jackfruits.

They can be used together with regular sugar to create sauces that are healthier and have a lower glycaemic index, meaning that they are suitable for diabetics.

However, they also tend to be more expensive. While regular table sugar goes for $1 per kg, the same amount of allulose sells for $6 to $9 per kg.

HPB is also looking to replace sugar in desserts with plant fibres known as inulin and oligofructose. 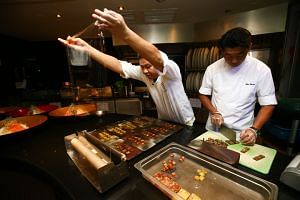 Getting the taste for healthier sugar: TungLok opts for novel sugar substitute in classic dishes 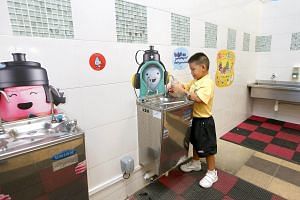 "Sugar provides bulking and flavour to a food product - so it's not just about cutting sugar and adding sweeteners," said Dr Eunice Pang, a food scientist at HPB.

For example, removing too much sugar from frozen yogurt can affect the freezing process. The resulting yogurt will not be creamy and will have a gritty texture, said Dr Pang, adding that using natural fibres can help prevent these problems.

HPB is working with chefs of food and beverage firms - including Chinese restaurant chain Tung Lok - to rework dishes to include these sugar alternatives.

For instance, Tung Lok has partially replaced some of the sugar in several ingredients for Chinese New Year dishes with allulose. This includes yusheng sauce, for a Chinese-styled dish served with raw fish, and niangao, a sticky rice cake.

"To translate the science into food we want to eat, we need the chefs," said HPB chief executive Zee Yoong Kang.

Chef Eric Teo, who is culinary director at ET Culinary Arts, said that sugar is very important in Asian cooking and substitutes often do not pass muster.

For example, pad thai, dongpo pork, and sambal chili all rely on sugar to bring out the flavour, Mr Teo said.

“Without sugar, your sambal chili colour won’t come out as glossy or dark red,” he said, adding that a balance needs to be struck between tasty food and good health.

“At the end of the day, it’s about whether the food is nice or not. If it’s not nice, people won’t go back.”

Mr Zee added that the board is also looking at a set of guidelines for sauces and desserts to reduce added sugar in such products over time. As manufacturers meet these targets, the HPB will make the guidelines more stringent.

“This has been a process we have seen work with sugar-sweetened beverages,” Mr Zee said. To qualify for the Healthier Choice label, sweetened drinks must now have only 6 per cent sugar – down from 8 per cent in 2011.

“The palate is a very trainable characteristic,” Mr Zee added. “By gradually reducing the sugar content over time, it allows for the palates of consumers to adjust.”

Senior Minister of State for Health Chee Hong Tat said on Tuesday that he was pleased to see "industry forerunners" taking the initiative to come up with lower sugar options.

"This move by the industry adds to our ongoing efforts to shift consumers' food choices by lightening palates and providing healthier alternatives," said Mr Chee.