Singapore's expertise in the health and biomedical sciences that it has painstakingly built up over the years is paying off now, not just in helping the nation battle the coronavirus but also in providing a bright spot in the economy.

Ms Audrey Lok, director of health and biomedical at Enterprise Singapore, says home-grown companies involved in pandemic efforts continue to attract demand and investments from around the world.

It raised US$27 million (S$38 million) in a Series B financing round in March, when the number of users on its platform reportedly more than doubled since the end of January.

The investment came amid greater awareness of the need for telemedicine - consulting a local doctor through video consultations - at a time of strict social distancing.

These are just two of the more than 40 local companies that are developing solutions to directly support efforts to stem the spread of Covid-19.

There are more than 300 biomedical start-ups in Singapore.

Ms Lok says the strong foundation that Singapore had laid through its early investments into biomedical research, building capability in medtech manufacturing, and growing the biomedical start-up ecosystem in recent years enabled the country to respond quickly when the pandemic struck.

"One reason for the increase in innovation activities for the sector is the strong support we are seeing from our public healthcare institutions and clinicians," she adds. 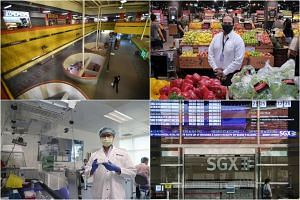 The kit, which was rolled out in early February to help clinicians identify and isolate infected patients, was developed by researchers at the Agency for Science, Technology and Research (A*Star) and Tan Tock Seng Hospital.

That know-how has since been transferred non-exclusively to a handful of biotechnology firms, including home-grown MiRXES, to scale up and manufacture the diagnostic tests, said an A*Star spokesman.

MiRXES chief executive Zhou Lihan says the company has overcome initial challenges to scale up production from an initial 100,000 tests a week to 400,000 tests.

The tests make use of a process known as polymerase chain reaction (PCR) to detect the presence of viral genetic material in a patient sample.

Challenges include a global shortage of key elements of a diagnostic test kit, such as chemical reagents and clinical grade polymer plastics used to contain the diagnostic test reagents, as well as uncertainty in freight.

"As MiRXES has been in the business of manufacturing diagnostic test kits for other diseases since we started in 2014, we had a ready supply of some of these items, such as the polymer plastic tubes," Dr Zhou says.

"And while several of our raw materials are imported, we tapped our longstanding relationships with international manufacturers and logistics firms to ensure that Singapore continues to get a steady supply."

The fulfilment of local demand for the Fortitude Kit is a top priority, Dr Zhou says, but the company's ability to manufacture beyond the local requirement has enabled it to sell kits to other hospitals and laboratories in the region and beyond.

The Singapore-made kit has been deployed in more than 20 countries, including New Zealand and the United States.

Dr Zhou says that on average, the material and manufacturing cost to supply a typical PCR diagnostic test is between $15 and $20, although this excludes other costs borne by hospitals and laboratories to collect patient samples and perform the tests.

Dr Zhou adds that MiRXES would likely "not see a drop in revenue this year".

Fellow biomedical company Esco Lifesciences Group has seen a surge in demand for its products, such as its biological safety cabinets that enable laboratory technicians to safely process samples from infected patients.

The firm is also leveraging its expertise on medical equipment to come up with new, point-of-care innovations such as its new mass screening swab booth, which aims to protect healthcare workers from being infected as they take samples from patients.

Mr Lin Xiangliang, chief executive of Esco Aster - the contract development and manufacturing organisation arm of Esco Lifesciences Group - says its $30,000 booth has a few additional features that could provide protection for the healthcare worker, patient and the environment.

These include decontamination features such as foot-operated disinfectant sprays and ultraviolet light, and two segregated chambers with differences in air pressure where a patient sits in a negative pressure chamber so the air, which may be contaminated by virus-laden droplets, does not escape.

The swabber, on the other hand, sits in a positive pressure room so contaminated air from the outside does not leak in.

Esco Aster has also developed a mobile diagnostics laboratory that will allow for decentralised testing.

Most PCR tests are now processed in specialised laboratories but Mr Lin says that this may make conducting Covid-19 tests for rural populations, or in areas lacking primary hospitals, difficult.

"A mobile laboratory fitted with all the necessary equipment and utilities could help," he adds.

40,000 daily Covid-19 tests have to be done in strategic, coordinated way: Lawrence Wong

These mobile laboratories, called Esco Aster Xpress, contain all the equipment required for PCR tests in 10-, 20-or 40-foot containers.

They also come with Esco Lifesciences Group's biological safety cabinets and other measures, including an effluent decontamination system for handling waste.

A fully-equipped lab that can process about 3,000 tests in eight hours costs $1.3 million.

Mr Lin says these mobile labs, which make use of the Fortitude Kit manufactured by MiRXES, could be ready for deployment by July.

He adds that the company has already received orders for both the swabbing booths and the Aster Xpress mobile labs from the Asean region, but declined to reveal more details.

Ms Lok from Enterprise Singapore notes: "Even as we help these companies in their business growth, we are heartened that Singapore can play a part in bringing these lifesaving innovations to the global community."