Singapore has one of the highest rates of myopia in the world, and local studies have found that those with the condition are more likely to get glaucoma, with the risk increasing as myopia becomes more severe.

Chinese Singaporeans with moderate myopia have a slightly higher risk of developing glaucoma than their Malay and Indian counterparts, according to the results of three separate studies carried out by the Singapore Eye Research Institute (Seri) and the Singapore National Eye Centre (SNEC) revealed yesterday.

Glaucoma can lead to blindness due to a build-up of pressure in the eye causing damage to the optic nerve. It affects around 3 per cent of people over 40 years old here and the risk increases with age.

While overseas studies have found a link between myopia and glaucoma, it is the first time this link has been found here, according to Professor Aung Tin, Seri's executive director and a researcher involved in the studies.

Prof Aung said that while researchers have yet to establish the reason for the link between myopia and glaucoma, the discovery shows that people should take preventive measures. "We suspect that when you have very high myopia, your eyeball becomes stretched and the tissue supporting the nerve in the eye is weaker, so you are at higher risk of eye pressure," he said, adding that reduced blood flow in highly myopic eyes could be another reason. 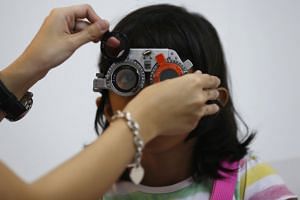 Singapore has the world's highest prevalence of myopia among children aged seven to nine.

Prof Aung, a senior consultant at the SNEC's Glaucoma Department, said myopia prevention starts with children and that lifestyle, environmental and behavioural factors should be tackled.

For example, a previous study found that lack of outdoor activity is a risk factor for myopia progression in children. Other risk factors for glaucoma include far-sightedness, use of steroid medication and having suffered an eye injury.

Mr Wong, 62, a glaucoma patient who declined to give his full name, has had myopia since he was in secondary school. It stabilised at 375 degrees in his 20s and he was diagnosed with glaucoma around 30 years ago. "Due to my tunnel and limited field of vision, I can focus on only one object at any one time," said the retiree, who is blind in his right eye and has very low vision in his left. "Hence, I tend to lose my bearing and orientation easily."

To cope, he walks slowly in public places and stops briefly when unsure of the path ahead.

A version of this article appeared in the print edition of The Straits Times on October 05, 2018, with the headline 'Have myopia? Risk of glaucoma may be higher'. Subscribe
Topics:
More
Whatsapp Linkedin FB Messenger Telegram Reddit WeChat Pinterest Print Purchase Article Copy permalink