SINGAPORE - The global cost of treating diabetes is set to double to US$2.12 trillion (S$2.91 trillion) by 2030 compared with that in 2015. Proportionally, the figures represent 1.8 per cent of the world's gross domestic product (GDP).

But if further preventive measures are not taken, the global cost is likely to rise even higher to US$2.45 trillion, or about 2.2 per cent of global GDP.

These figures were cited by Dr Enis Baris, the World Bank's practice manager for East Asia and the Pacific region, during a ministerial conference on diabetes on Monday (Nov 26).

But this is just the healthcare cost of treating diabetes patients, Dr Baris noted, warning that the true cost is greater.

This would include the indirect costs on society and the global economy, such as threats to life expectancy, worker productivity and economic competitiveness.

With rising childhood obesity, the global incidence of diabetes is expected to continue to go up.

"Diabetes is here to stay. There's no sign that we will be getting rid of it in the near future," said Dr Baris. 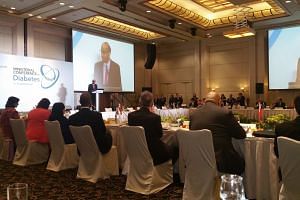 But how diabetes will affect future generations varies among and within countries, said Professor Rifat Atun of Harvard University.

But in Brazil, the situation is reversed, with rates of diabetes falling among the rich and more educated people, but rising among the poor and less-educated.

Prof Atun said healthcare institutions need to rethink their approach to treating non-communicable diseases like diabetes. "We need to go back to the drawing board and reflect on how to respond to the challenge of diabetes," he added.

Agreeing, Professor of diabetology Hanno Pijl, from Leiden University in the Netherlands, said most healthcare systems in the world are outdated.

"The nature of disease has changed significantly. In the 19th and early 20th century, we were primarily faced with infections, which are relatively simple diseases with a single cause," he said.

But non-communicable diseases like diabetes are, with no exception, extremely complex multi-factorial, multi-system disorders, he added. Pills do not address the root cause of Type 2 diabetes; they merely treat symptoms."

The solution may lie in transforming the environment, including identifying the social and commercial factors that contribute to diabetes.

The low cost and availability of food and beverages with high sugar content, and shifting social realities such as globalisation and urbanisation are some such factors.

Patients need to be better informed about the nature and origin of their disease and the possibilities for tackling the root cause through lifestyle changes, said Prof Pijl.

Such lifestyle intervention would act as a complement rather than an alternative to traditional medicine and should be integrated into the conventional care system, he added.

"If we leave the solution of this huge health threat to healthcare alone, we are fighting a losing battle. We need to change our environment as well, "said Prof Pijl.