Restaurants Hjh Maimunah, Mamanda and Pu3, along with hawker stall Dapur Bonda Khadijah at Berseh Food Centre, have come on board the Health Promotion Board (HPB)'s Healthier Dining Programme.

Under this scheme, the board works with the food and beverage industry to offer more lower-calorie meals made with healthier ingredients and reduced-sugar beverages.

The news was announced at a media event at Hjh Maimunah's Jalan Pisang outlet in Arab Street on Wednesday (Sept 26). It has one other outlet in Geylang Serai.

The eateries join Indonesian restaurant Rumah Makan Minang, which was the first nasi padang eatery to sign up for the programme in July.

Brown rice contains more nutrients and minerals than white rice as more of its kernel is left intact.

However, some restaurants said the take-up rate for wholegrain rice has been low, despite selling it for the same price as white rice.

Hjh Maimunah, which serves traditional kampung-style cuisine, has has not had many customers asking for brown rice since this was made available in September.

On a weekday, an average of 30 of its 1,000 customers order brown rice at each of its two outlets, said the restaurant's general manager Mastura Didih.

But the restaurant sells both types of rice at 80 cents to encourage people to try the healthier option.

"We want to introduce brown rice to the community because they always think that brown rice is not nice," said Ms Mastura. "They just see the colour and they don't even want to try it."

When the restaurant offered brown rice for free during a trial in August, only around 40 customers a day opted for it. 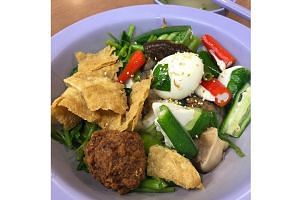 Ms Mastura said to reduce wastage, the restaurant sometimes mixes the brown rice with white rice to serve to customers at the end of the day.

Besides the brown rice option, the restaurant also introduced five healthier dishes that either do not use oil or use a healthier oil.

Rumah Makan Minang, which is in Kandahar Street in Kampong Glam, has also been trying to minimise the wastage of red rice by cooking more only when it runs out.

The Healthier Dining Programme started in 2014 and there are now more than 1,140 food and beverage operators with 8,700 outlets on board. Of this, 680 outlets offer halal food.

On Wednesday, five nasi padang eateries - Hjh Maimunah, Pu3, Sinar Pagi, Pariaman and Sabar Menanti - served a mix of 80 per cent white rice and 20 per cent brown rice to 1,200 lunch-time customers, to test if they could tell that brown rice had been added.

Many customers did not notice the difference and said the taste remained the same.

Ms Hani Sar, 44, said that cost and taste are the two most important factors when it comes to choosing between the two types of rice.

"Brown rice is more expensive but I wouldn't mind paying more once in a while to eat healthier," added the administrative executive.