For doctors on the front lines of the battle against the coronavirus, the work is unending. But they have been stepping up to do more and help one another.

Thirty-three-year-old Dr Tay Woo Chiao started his stint at the National Centre for Infectious Diseases (NCID) in January, expecting to deal with patients with known diseases such as HIV infection and dengue fever.

There were "murmurings" of an outbreak caused by what was then called the Wuhan virus, and everyone was on the alert, he says.

However, no one expected the coronavirus outbreak to evolve so quickly into the deadly pandemic that the world is now witnessing, in just two to three months.

The virus, initially seen as having an impact that was likely to be negligible, turned out to be a highly transmissible one 10 times deadlier than the swine flu that caused a global pandemic in 2009.

The coronavirus has infected enough people here - and in many other places - to keep doctors and nurses as busy as they can be.

Before he knew it, Dr Tay, a resident with the National Healthcare Group (NHG) Internal Medicine Residency programme, found himself right in the middle of an escalating virus war.

At NCID, a centre specially built to manage outbreaks, Covid-19 patients were first placed in single isolation rooms. As cases rose, capacity was ramped up. NCID says it started cohorting confirmed patients in the second week of March. They were family members like husband and wife, or siblings, or those of the same gender.

Along the way, as more became known about the disease, some approaches changed. For instance, disposable face shields gave way to reusable goggles to lessen wastage of personal protective equipment (PPE), given that this would be a "long-drawn-out battle", says Dr Tay.

To protect his family at home, he started to take a shower at the end of each shift before leaving the hospital. He also keeps a pair of shoes at work and uses another pair to travel to and from home.

Once he is home, he makes a beeline for the nearest bathroom to take another shower before he catches up with his parents and sister.

As an extra precaution, he soaks his clothes in a Dettol solution before they are washed together with the family's laundry.

Personally, he made a conscious effort to not bite his nails, and while working, he makes sure he does not touch his face. "I don't want to be the... doctor to end up in the ward," he says, adding that it would be very sia suay, using the Hokkien term for disgrace.

While Dr Tay says he is a bit disheartened by the rising numbers, overall, he feels privileged to be fighting the epidemic from the heart of the action, from when the first case appeared.

Since late March, NCID has been transferring patients to private hospitals like Mount Elizabeth Hospital and to community facilities, including those set up in the Singapore Expo halls from April 10.

It is quite an effort to transfer these recovering patients every day, says Dr Tay. The administration work takes up half his time now when he is at the wards.

"The hospital has to be reserved for patients who are more ill. We want patients to leave only when they are well, but we cannot keep everyone here because of capacity," he says.

"The trick is to find the right patients to decant... It's a bit like saying if a student scores 90 marks in a few tests, he would be okay in the next exam."

Since April 1, the day Singapore registered 1,000 Covid-19 cases, doctors from public hospitals have been deployed to NCID. (Those from Tan Tock Seng Hospital have always been part of the outbreak response.)

Singapore now has more than 17,000 coronavirus cases, as more are uncovered at dormitories housing foreign workers.

For instance, a multidisciplinary team from the Singapore General Hospital, National Dental Centre Singapore and National Cancer Centre Singapore worked with other groups as well as the Manpower Ministry to screen more than 1,500 migrant workers who were relocated to vacant Housing Board units in Bukit Merah before they could return to work in essential services.

Other teams worked at the dorms and isolation facilities.

Some healthcare workers are working in tents and a multi-storey carpark, where they screen patients for Covid-19. They battle not just the virus but the heat - and sometimes, headaches - from being in PPE for hours.

As more manpower is needed, plans are in place to tap private healthcare workers, retirees and volunteers, the Health Ministry has said. It has also been working with hospitals to convert wards into isolation wards and intensive care units (ICUs). 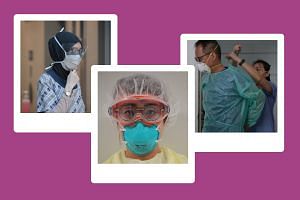 At Changi General Hospital, Dr Jansen Koh, chief and senior consultant of the respiratory and critical care medicine department, says non-ICU front-line staff are trained to be ICU-ready in anticipation of more cases. More training in the use of PPE is also done.

As most patients do not become very ill - their immune systems simply fight off the infection - the majority of the cases here are sent to community facilities, with about 1,500 of the higher-risk cases being cared for in hospitals.

As there is no proven treatment, repurposed drugs and supportive measures are used. There are also the emotional, psychological and social aspects of treatment, which naturally place more demands on doctors and nurses, as Covid-19 is a relatively new disease.

"Many of the patients are not only fearful of a possible clinical deterioration, but also extremely worried about infecting their children, their spouse, their parents and their loved ones," says Dr Koh.

"It is also at this low point that most patients would need that physical touch and physical presence of their loved ones, which is absent due to the need for isolation."

Doctors realise the blood oxygen saturation levels of some Covid-19 patients can rapidly slide after about five to 14 days of being infected. They have rushed to sedate, intubate and hook these patients up to mechanical ventilators, which take over the work of breathing.

"In the early phase of the outbreak, our approach to suspected Covid-19 cases with breathing difficulties was early intubation and ventilation," says Dr Tan Chee Keat, head and senior consultant of the intensive care medicine department at Ng Teng Fong General Hospital.

"However, some suspected Covid-19 cases who subsequently tested negative were intubated when they may have benefited from non-invasive ventilation."

Intubation requires heavy sedation and carries the risk of lung damage and other problems. As ICU doctors see more patients - and share information on treating them - they have relooked the need to intubate critically ill patients early.

These patients typically have acute respiratory distress syndrome, where the lungs suffer widespread damage, making breathing difficult or impossible. But they can also show up with non-respiratory symptoms.

"We now know that Covid-19 is not just a disease affecting the lungs, but also other organs. We have patients with gastrointestinal issues, acute kidney failure, heart problems, stroke," says Dr Tan.

There are patients who suffer multi-organ failure that could be caused by a cytokine storm, which happens when their immune system overreacts to the virus. Cytokines are molecular messengers of the immune system.

Then there are younger patients who may not be gasping for breath even as their oxygen levels drop to alarming levels. "Some patients with chest X-ray findings of severe pneumonia recovered without needing oxygen therapy," says Dr Tan.

She adds that their approach to ICU patients now varies depending on the oxygen level in a patient's blood. Patients with a low but less alarming oxygen level are first treated with "awake prone" therapy, where they are encouraged to rest and sleep in a prone position - that is, on their stomach - to help boost their oxygen levels

Doctors may also use high-flow nasal cannula therapy, she says. This is an aerosol-generating procedure that carries a high risk of infection for healthcare workers, and is done in a negative-pressure room with use of full PPE, she adds.

The hospital has translated the instructions for prone positioning into English, Chinese, Malay, Bengali and the Myanmar language for their Covid-19 patients in single ICU rooms.

"We tell them: 'You have to treat yourself. Lie on your tummy for as long as you can to improve your breathing'," says Dr Tan.

Even as more is known about the disease, many questions remain unanswered.

For doctors on the front lines, the work is unending.

As the elderly and those with underlying illnesses are at increased risk of becoming critically ill from Covid-19, Dr Tay avoids visiting his grandmother, who is 91.

These days, he starts work earlier, and may finish later to help his colleagues out.

"You look at your friends, you see the look of despair on the faces, and you stay... to help. You also hope that they can help you when you need help. There is solidarity among us."

At other hospitals, healthcare workers have also stepped up to help, do more and cover for one another.

Just as the pandemic has made the world a smaller place by bringing people closer together, it has also brought together healthcare workers who share a common goal. 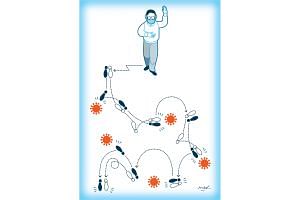 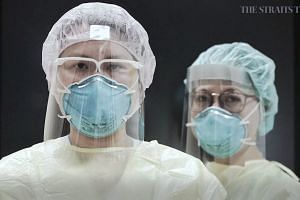 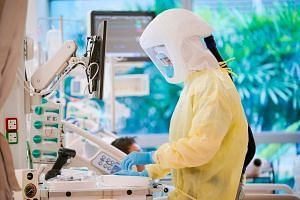 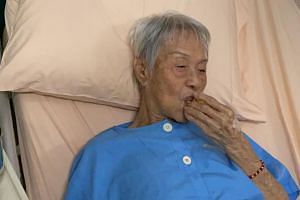 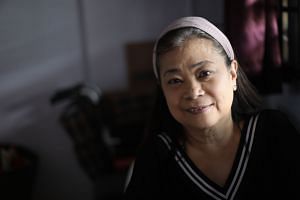 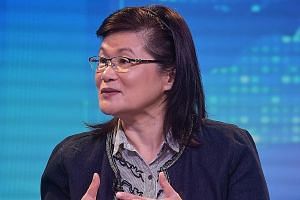 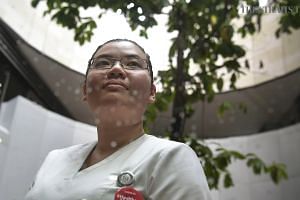 A version of this article appeared in the print edition of The Sunday Times on May 03, 2020, with the headline 'Finding himself in the middle of a virus war'. Subscribe
Topics:
More
Whatsapp Linkedin FB Messenger Telegram Reddit WeChat Pinterest Print Purchase Article Copy permalink