SINGAPORE - Finance Minister Heng Swee Keat, 54, collapsed at a weekly Cabinet meeting on Thursday (May 12) after suffering a stroke.

He is being attended to by doctors from Tan Tock Seng Hospital.

Here are some things to note about the condition:

What is a stroke?

Strokes occur when blood supply to part of the brain is cut off, and cells in that part die because of a lack of oxygen. 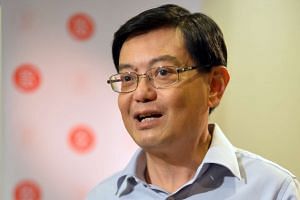 There are two types of strokes. Ischaemic strokes are caused by blood clots in the brain. Haemorrhagic strokes happen when a blood vessel in the brain bursts, leading to bleeding in the brain.

People can also get what is known as a transient ischaemic attack, when blood supply to part of the brain is temporarily cut off. This causes symptoms similar to a stroke, which may last for a few seconds or up to a day.

What causes a stroke?

Chronic conditions such as high blood pressure and high cholesterol, especially if they are not properly controlled, can increase one's risk of getting a stroke.

Diabetics and smokers also have a higher stroke risk, as do people whose family members have had strokes themselves.

Stress can also raise a person's blood pressure and increase their chances of a stroke.

What are the symptoms of a stroke?

One of the key signs of a stroke is sudden weakness or numbness, usually on one side of the body. They may also have slurred speech and sudden difficulty in seeing out of one or both eyes. Other symptoms include difficulty swallowing, dizziness, a sudden severe headache, or a sudden loss of consciousness.

What happens after a stroke?

Those who have had a stroke typically have problems with moving around or swallowing, and will need rehabilitation.

Up to a third of stroke patients make a full recovery. The remaining two-thirds, however, have some residual disability. Most recovery occurs in the first three to six months following a stroke, but may continue slowly for many years.