The number of new human immunodeficiency virus (HIV) cases reported among Singaporeans and permanent residents has gone down, even as more people are going for voluntary screenings.

In line with World Aids Day yesterday, the Ministry of Health (MOH) and the Health Promotion Board (HPB) released figures that showed a general downward trend of HIV cases here in the past four years.

Between January and October this year, 275 cases were detected, while 265 were diagnosed in the same period last year. The corresponding figures for 2017 and 2016 were 361 and 319, respectively.

Doctors said they have noticed greater awareness of HIV among the young here, especially those within the homosexual community. They said having HIV talked about more has reduced the stigma of the disease, with many now more willing to undergo treatment.

Dr Leong Hoe Nam, an infectious disease specialist at Mount Elizabeth Novena Hospital, said: "Young people are more aware that a diagnosis does not mean their lives are over. Some of them know others who have HIV who are living good, happy lives."

He said those who have their infections detected early can receive treatment with "practically no side effects" and "no changes to their projected lifespan".

It is actually the older population who are more concerning, said Dr Leong. "They tend to think of themselves as more invincible, or smarter about their choice of sexual partners.

"But HIV has a really long incubation period. Not only do they not get treatment when they are not diagnosed, but they could pass it on to their partners too." 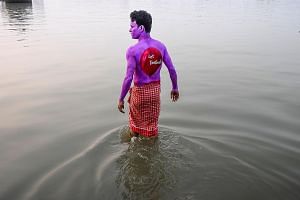 Of the newly reported cases, 19 per cent were detected through voluntary screening, a 2 percentage point improvement from last year.

The majority - 55 per cent - were detected by tests done in the course of medical care, while another 20 per cent were detected through routine programmes of HIV screening.

About 49 per cent were diagnosed at a late stage, down from 53 per cent last year.

Dr Piotr Chlebicki, an infectious disease specialist at Mount Alvernia Hospital, said: "Recent studies have shown quite clearly that if treated early, patients can have their HIV become 'undetectable', which means it cannot be transmitted to others.

"That is much better than treating it later on when the immune system could already have suffered irreversible damage."

The authorities analysed 154 of the new cases and found that those aged between 20 and 39 accounted for 41 per cent of them, while those between 40 and 59 years made up 40 per cent.

All were exposed to the virus through sexual intercourse.

HIV, the virus that causes acquired immune deficiency syndrome (Aids), can be transmitted through unprotected sexual acts or through the sharing of needles, syringes or other injection equipment. In some cases, it can also be passed on to a child by his mother during pregnancy, or through breastfeeding.

Professor Roy Chan, president of Action for Aids, said he thinks more people went for voluntary screenings than the 19 per cent figure indicates. "My feeling is that this is an underestimation. We need to review how we classify modes of detection."

MOH and HPB urged individuals at risk of HIV infection to go for regular HIV testing available at polyclinics, private clinics and hospitals.