Each trip took half an hour, the housewife said in Mandarin.

"A round trip would take an hour, on top of the five hours I had to spend at the centre for my treatment," she added.

But Madam Lau's travelling time has been cut by two hours a week from May last year, when a dialysis centre opened at Block 204 Marsiling Drive, a 10-minute walk from where she lives.

Set up by the National Kidney Foundation (NKF), the new centre will benefit kidney patients who live in the area, said President Halimah Yacob at its launch on Saturday (June 15).

She also noted that patients can also have their meals in between dialysis appointments at the nearby market and coffee shop.

The centre is equipped with 22 dialysis machines that can benefit 132 patients.

Madam Lau, who lives in a four-room Housing Board unit with her husband, 66, and her youngest daughter, 34, said that she now does not have to trouble them as well as her two other daughters when she needs to go for her dialysis treatments.

She said: "It also does not matter if they are late to pick me up for my treatments. I can make my own way to the centre, slowly."

Madam Lau, who also suffers from diabetes, joint degeneration and high cholesterol, has been going for dialysis for the past 12 years. 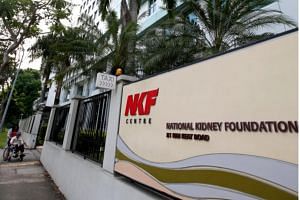 The NKF said during the launch that it will be rolling out a fall prevention programme to reduce the number of patients missing dialysis sessions.

"One fall incident tends to lead to repeated falls over time due to reasons such as weakened reflexes and muscles after the first fall," it said.

Patients may have to depend on a walker or a wheelchair as a result, the NKF said. They may also restrict their mobility and miss dialysis sessions due to a fear of falling, compromising their quality of life, it added.

The new dialysis centre in Marsiling was built with a $2-million donation from the estate of Gerry and Jo Essery.

Another $600,000 was donated for the centre's operations at its launch. The funds came from the estate as well as from Tan Hwa Luck, a long-time friend of the Esserys.