Two years after Singapore declared its war on diabetes, Deputy Prime Minister Tharman Shanmugaratnam told an audience that included 12 health ministers that this campaign could not be won by health ministries alone.

Instead, it had to be waged on multiple fronts, with employers, citizens and the whole of government chipping in to fight a condition that not only compromised an individual's quality of life, but was also a huge drain on resources.

"It has been estimated that the global annual healthcare expenditure on diabetes was over US$700 billion (S$961 billion) in 2017," said Mr Tharman, who opened the Ministerial Conference on Diabetes yesterday. The pain was felt close to home, with almost half a million Singaporeans already living with the disease.

The only way to keep the condition at bay is to change mindsets across the board, with a sustained effort at putting out information on the health risks of diabetes, said Mr Tharman.

Mr Tharman added that the effort to fight diabetes could not be confined to health ministries. "The levers or influences that governments have go well beyond the healthcare sector," he said.

That is why, in Singapore, the food and beverage sector had been persuaded to switch to healthier ingredients, with almost half the hawker stalls offering at least one healthier option last year. Fitness corners were also placed across housing estates and more water dispensers were being installed at hawker centres to encourage people to drink plain water.

The Straits Times had also reported earlier that Singapore was examining the idea of a sugar tax - a move already adopted by 59 countries which got the thumbs up from several speakers at the conference.

Dr Enis Baris of the World Bank described it as a good return on investment. He said: "Taxation of sugar-sweetened beverages is an anti-obesity strategy which can reach the whole population at minimal cost to government." 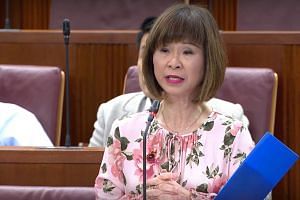 Global cost of treatment for diabetes set to double by 2030

England, which introduced a sugar tax in April, has seen an 11 per cent drop in the sale of sweetened packaged drinks in the past 12 months.

Mr Tharman said the second mindset shift is for employers to promote good health at the workplace: "The intuitive conclusion that healthy employees are more productive employees has been borne out by research."

That is why some employers in Singapore were providing free health screenings for their workers and even coaching them about changing their diet and lifestyle.

But most critical is a mindset shift that needs to come from the people themselves, who should see the benefits of adjusting their lifestyles, said Mr Tharman. However, he admitted that human psychology is a problem. He said: "The pleasures of a slice of chocolate cake are immediate, while the costs to health are hidden and set in much later, but with potentially severe consequences."

He said people should modify their lifestyles before there are any signs of the disease. This could reduce the risk of them getting diabetes by between 40 per cent and 70 per cent. Parents could play a critical part in teaching children to eat healthy, while countries could collaborate and share best practices, said Mr Tharman.

"It is indeed easier to achieve the mindset shifts I spoke about when they become the norm across countries," he added.

A version of this article appeared in the print edition of The Straits Times on November 27, 2018, with the headline 'Diabetes must be fought on multiple fronts: Tharman'. Subscribe
Topics:
More
Whatsapp Linkedin FB Messenger Telegram Reddit WeChat Pinterest Print Purchase Article Copy permalink