Confidential information of 14,200 people with HIV - including their names, contact details and medical information - was illegally obtained and leaked online by an American fraudster who was deported from Singapore, the Ministry of Health (MOH) revealed yesterday.

Mikhy Farrera-Brochez was jailed in 2017 for several fraud and drug-related offences and lying to the Ministry of Manpower about his own HIV status.

His partner was Ler Teck Siang, a Singaporean doctor who was head of MOH's National Public Health Unit from March 2012 to May 2013 and had access to the HIV Registry.

He has been charged under the Official Secrets Act (OSA) for failing to take reasonable care of confidential information regarding HIV-positive patients.

Health Minister Gan Kim Yong told reporters yesterday: "I am sorry that one of our former staff, who was authorised to have access to confidential information in our HIV Registry, appears to not have complied with our security guidelines, and this may have led to an unauthorised person gaining pos-session of the data and disclosing it online."

The records leaked included those of 5,400 Singaporeans and permanent residents diagnosed with the human immunodeficiency virus up to January 2013 - of whom 1,900 have died - and 8,800 foreigners diagnosed up to December 2011. 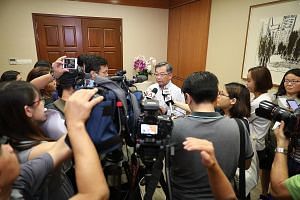 Who are the pair at the centre of HIV data leak?

Data of 14,200 with HIV leaked online: Victims of incident stunned and worried

Details of 2,400 of their con-tacts - deemed to be at risk - were also leaked. "Our priority is the well-being of the affected individuals," said MOH. It started contacting affected individuals last Saturday, and has successfully reached more than 1,000 out of all 3,500 HIV-positive Singaporeans.

However, the information is still in the hands of Farrera-Brochez, who was deported after he had served his jail term. He remains outside Singapore.

It came to light that Farrera-Brochez, who was HIV-positive, had used his boyfriend's blood to pass medical tests so that he could work in Singapore, and also got hold of information illegally from the HIV Registry that Ler had access to.

Farrera-Brochez, 33, who was a polytechnic lecturer here, was sentenced to 28 months in jail in 2017 for offences including cheating and possession of drugs. Ler, 36, has been sentenced to two years in jail for abetment of cheating and for giving a false statement to a public servant. He is appealing.

The ministry learnt of the leak last Tuesday, and made a police report the following day.

Since 2016, it noted, additional safeguards against mishandling of information by authorised staff have been put in place, including a two-person approval process to download and decrypt information.

Mr Gan said MOH will not hesitate to take stern action against staff who violate security guidelines, abuse their authority or their access to information.

The Health Ministry has asked the public to call its hotline on 6325-9220 if they have any infor-mation regarding the incident or any concerns.

When contacted, the police said that they are seeking the help of their foreign counterparts in their investigations. They also reminded the public that any person who possessed, used or communicated any confidential information under OSA could face stern action.

A version of this article appeared in the print edition of The Straits Times on January 29, 2019, with the headline 'Data of 14,200 people with HIV leaked online by US fraudster'. Subscribe
Topics:
More
Whatsapp Linkedin FB Messenger Telegram Reddit WeChat Pinterest Print Purchase Article Copy permalink