Singaporeans unknowingly play host to unwanted "visitors" who can cause health problems as they lurk unseen in places around the home.

Dust mites are tiny bugs that live by the millions in places like pillows, beddings and carpets. They thrive by feasting on the dead skin and hair of humans and pets.

These mites are also a major cause of allergies and asthma. 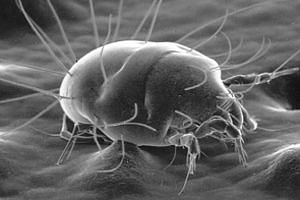 One in five children and 5 per cent of adults in Singapore suffer from asthma, and about 85 per cent of these asthmatic patients have an allergy to dust mites.

A new study by researchers from NUS-SMART (Singapore- MIT Alliance for Research and Technology) discovered that dust mites found in beds and pillows could cause more harm to asthmatic patients than previously thought.

These bugs and their faecal matter can damage a person's DNA, which can worsen lung inflammation and lead to cell death if the DNA is not repaired.

Here are some things you should know about dust mites.

House dust mites are microscopic bugs that primarily live on the dead skin cells that humans and their pets shed. The mites are mostly harmless to people and do not carry diseases, but they and their faeces can cause allergic reactions to humans, especially among asthmatics.

The bugs are only 250 to 300 microns in length and have translucent bodies, making them invisible to the naked eye.

Adult females lay about 40 to 80 eggs singly or in small groups of three to five.

After the eggs hatch, a six-legged larva emerges. An eight-legged nymph will appear after the first moult. Eventually, it will become an eight-legged adult after two nymphal stages occur.

The life cycle from egg to adult is around one month and the adult will continue to live for another one to three months.

The primary food source of dust mites consists of skin scales, also known as dander, from humans and animals.

However, they can also get their nutrients from other sources like fungi, cereals, crumbs, pet food and fish food flakes.

3. Where are dust mites found?

Skin cells and scales are often found in mattresses, furniture and carpeted areas.

Beds are a prime habitat for dust mites and a typical mattress may have around 100,000 to 10 million mites inside.

A single dust mite produces about 20 waste droppings a day, each containing a protein that many people are allergic to.

The car is another place where dust mites thrive.

The hot spots where many of these tiny creatures can be found include the steering wheel, radio, gear shift, cup holders and car seats.

4. What are the symptoms of allergies to dust mites?

Symptoms of an allergy to dust mites include runny nose, sneezing, nasal congestion, red or watery eyes, asthma and difficulty in breathing, eczema, cough or hay fever. You may experience all or just some of these symptoms.

For children, frequent upward rubbing of the nose could indicate an allergy to dust mites.

A doctor can use blood tests and skin tests to confirm a suspected allergy.

5. Who are most susceptible to dust mite allergies?

The lifestyle of a person can affect his susceptibility to allergies caused by dust mites.

This was revealed in a study conducted by scientists from the National University of Singapore (NUS) and Agency for Science, Technology and Research (A*Star) and published in science journal Allergy in February 2014.

Other studies have also shown that asthma patients living in mechanically-ventilated homes - such as houses with fans, roof ventilators and air ducts- had better health than those living in air-conditioned homes.

6. How does one get rid of dust mites?

Install extractor fans in kitchens and bathrooms and wipe away condensation from windows every day.

Since a bed is a hot spot for dust mites, make sure to wash the sheets, blankets and pillowcases every two weeks.

The water used to wash your sheets, blankets and pillowcases should be at least 54 deg C.

You can also buy dust-proof or allergen-impermeable covers made of plastic to encase mattresses, pillows and duvets.

Remove carpeting, and opt for floor coverings like laminate, wood, tile, linoleum or vinyl flooring instead.

If you have carpets, vacuum them every day.

If your child is allergic to dust mites, make sure the bedroom is kept tidy and soft toys are stored in a wooden box to prevent them from collecting dust.

A useful tip would be to freeze favourite soft toys at least once a week to kill dust mites and then wash the toys to remove allergens.