SINGAPORE - The cluster of Covid-19 cases in Hougang Avenue 8 could possibly be linked to previous infections in the area, but experts say cryptic cases that contribute to such scenarios are to be expected.

Cryptic cases refer to those that have gone undetected so far, and are also unaware they are infected.

The cluster, which has grown to eight cases, involves a Giant supermarket in Block 683 and was first announced on Thursday (Aug 19).

There were several outbreaks in the area in May and June with swab tests carried out for residents, visitors and staff.

He added that as more people get vaccinated, those infected will likely have mild or no symptoms, and may be less aware they are carrying the virus.

"We should not be so concerned about where or when someone got infected, as this is part and parcel of learning to live with endemic Covid-19.

A disease that is endemic is one that remains permanently in the community, such as influenza.

"When someone catches the flu, they are not so concerned about where they caught it from, because it is endemic. A similar attitude should apply to Covid-19 here in the future," he added.

Professor Dale Fisher, a senior consultant at the National University Hospital's Division of Infectious Diseases, said: "Actually, cryptic spread is our future and will be quite normal in the endemic phase."

Both experts noted that unlike previous outbreaks in Hougang, there has been no call for mass testing in the area to date.

This reflects a shift in Singapore's strategy towards tackling the virus in future, they said. 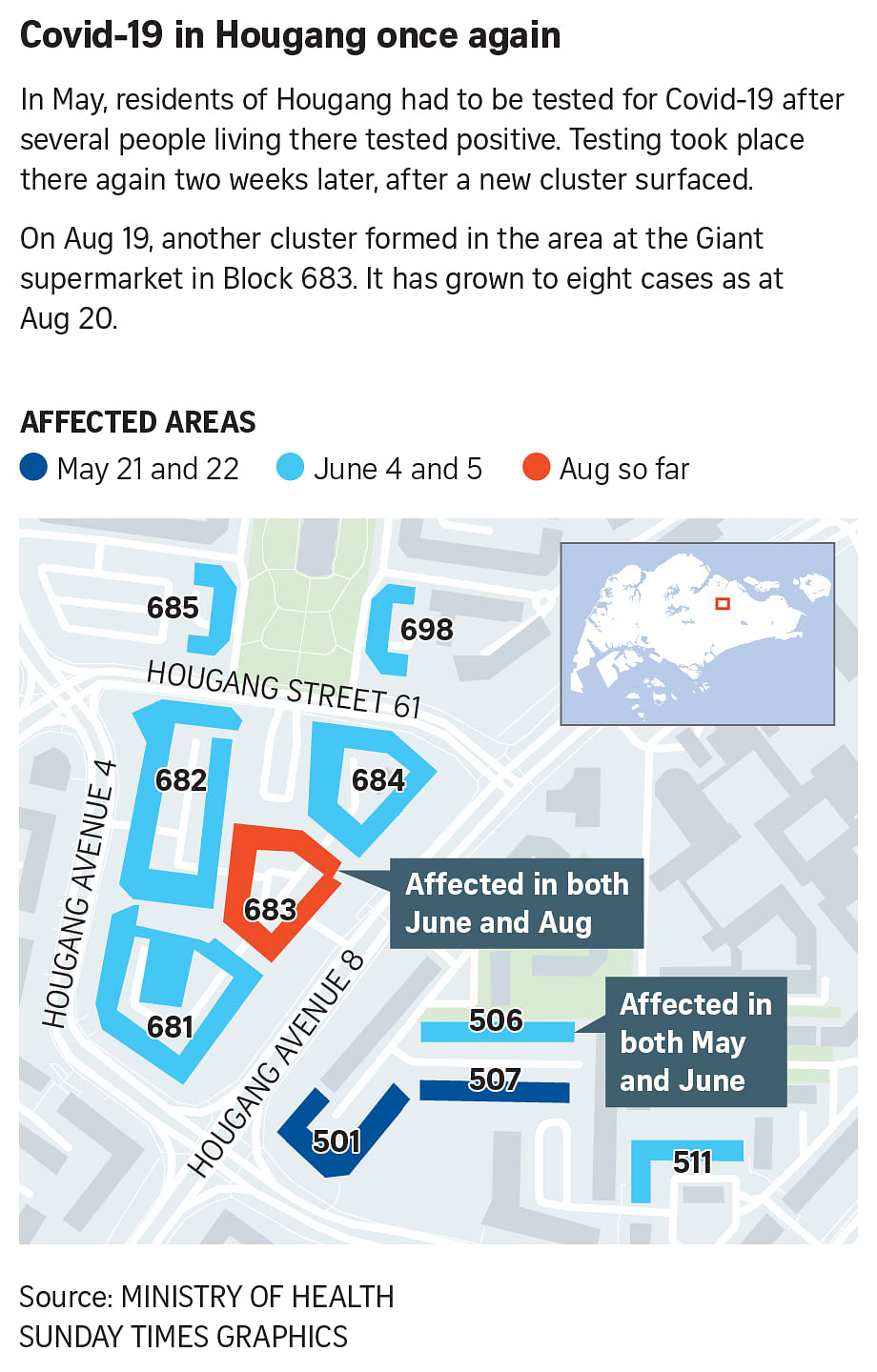 Prof Fisher, who is also a professor of medicine at NUS' Yong Loo Lin School of Medicine, said: "Past responses have necessarily been harmful socially and economically to individuals and to the nation. They had to be to save lives.

"Now that the threat to life is much less because of the vaccine, our responses from the past are not needed."

He said with the majority of Singapore residents now safe from severe disease, the future is not about finding every case, shutting businesses and putting people in quarantine.

"It is about minimising spread through sensible actions that don't impact people excessively," added Prof Fisher.

Vaxxed or vexed: What will life for the unvaccinated be like in Singapore?

Prof Teo said contact tracing will not cease completely. It will instead be modified to focus on high-risk groups, and in locations frequented by high-risk people, as well as in specific settings, including healthcare settings and migrant worker dormitories.

"With the transition to endemic Covid-19, we will also move beyond mass testing every time we discover a cluster in the community," he said.

The area around Hougang Avenue 8 had seen a number of cases in previous months.

Over two days from June 4, residents, visitors and staff at eight Housing Board blocks in Hougang - including Block 683 - underwent Covid-19 swab tests after a cluster was reported at Block 506.

There were 13 cases linked to that cluster before it was closed.

Residents of the same block also had to be swabbed in May after some of their neighbours tested positive.

People living in blocks 501 and 507 also underwent mandatory testing after traces of the virus were found in wastewater samples taken from those blocks.

Prof Teo said despite rigorous testing efforts, the current cluster may be linked to the previous infections in the area.

First, some cases could have been missed by the tests because they either did not reside or work in the locations targeted for mass testing, or happened to be in the incubation phase of the virus during the period of testing.

"This is why when one tests negative, it will still be important to monitor their own symptoms or to follow up with a self-test a few days later just to be certain," said Prof Teo.

Second, cryptic spread could have occurred through vaccinated individuals who did not realise they were infected.

"Fully vaccinated people are more likely to have no or only mild symptoms when they are infected, they will not realise themselves that they are infected, and this invariably will increase the chances of cryptic spread in the community," added Prof Teo.

Prof Fisher agreed, adding: "The disease is much harder to track when so many people spreading it have no symptoms."

Prof Teo said those living in the area should get vaccinated, wear masks with good filtration, maintain good hand hygiene and cover their mouth and nose when sneezing or coughing.

"Seniors or anyone with underlying medical conditions who live and move about in these neighbourhoods may also want to avoid crowds, since this can increase the chance of them meeting someone who may be infected," he added.

Prof Fisher said the unvaccinated in the area should pay heed.

"They need to understand that there will be a lot of (the coronavirus) around as restrictions are eased - and they are not protected by others being vaccinated."