SINGAPORE - The Ministry of Health (MOH) plans to change the law so that by 2020, all cigarette packs sold here will not be allowed to carry logos, brand images and any promotional information.

Instead, they would all be sold in packs of a drab dark brown colour. But warnings may carry brighter colours.

The ministry also wants the gory picture on the pack showing the ill effects of smoking, such as blindness and gum disease, to cover at least 75 per cent of the pack, up from 50 per cent now.

This is its latest salvo to curb smoking here, following bans on tobacco advertisements, point-of-sale displays, a high tax and no smoking zones.

Within minutes of the announcement, Dr Tedros Adhanom Ghebreyesus, director-general of the World Health Organisation, sent Singapore his congratulations on the decision “which affirms its status as a global leader on tobacco control and protection of health”.

Singapore's fight against smoking started in the 1970s when 23 per cent of the population smoked. But in spite of the Government's efforts over the past decade, the rate of smoking has ranged between 12 and 14 per cent since 2004.

In a press statement on Wednesday, MOH said: "Of particular concern, there remains a sizeable proportion of adult men (more than one in five) who smoke daily."

So more needs to be done, it said.

Following three rounds of public consultations, as well as evaluation of both local and international research on smoking cessation, the ministry decided that standard packaging would:

- reduce the attractiveness of tobacco products

- remove tobacco packaging as a form of advertising and promotion

- make the warning on the package more noticeable

- provide better information on the risk of tobacco use

The MOH will propose amendments to the Tobacco (Control of Advertisements and Sale) Act early next year. If enacted, the changes will come into force from 2020. 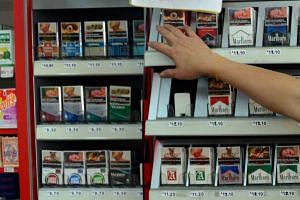 Minimum age to buy, use and sell tobacco products to be raised

The ministry added that sufficient notice will be given to the tobacco industry to inform them of the finalised specifications of the standard package.

The proposals include the use of a standardised drab dark brown colour or pantone 448C, such as has been adopted in Australia since 2012. Also, the brand name and product names are to be displayed in a standard colour and font style.

The packages cannot carry characteristic noises or scents, or features that change after sale, such as those triggered by heat or can be seen under flourescent light.

Even the way the packs are opened will be standardised.

Experts interviewed believed that the measure was worth a try.

Said Associate Professor Loo Chian Min, a senior respiratory and critical care medicine consultant at Singapore General Hospital: "There is good evidence that such measures alter behaviour and perception that will lead to smoking cessation."

Professor Chia Kee Seng of the Saw Swee Hock School of Public Health said the target is to stop younger people from picking up the habit. He said people who do not start smoking by the age of 25 usually do not become smokers.

Standardised packs "reduce dramatically the appeal of tobacco products, especially among youth and young adults", he said, adding: "I don't think it will work on its own but it will work together with all the other existing policy measures. We should look at various control measures as a package, not as individual measures."

Head of the Saw Swee Hock School, Professor Teo Yik Ying, added: "This new regulation is not intended to be a magic bullet, but to complement existing tobacco control measures."