A blood test for detecting early gastric cancer may be available by the end of this year. If approved by the Health Sciences Authority, it will be the first such test in the world, said the expert leading the project.

Associate Professor Yeoh Khay Guan of the Yong Loo Lin School of Medicine at the National University of Singapore said: "Gastric cancer is a silent killer as it is often detected late, making it harder to treat and cure."

Gastric cancer is the fifth-most common form of cancer, with about a million new cases being diagnosed a year worldwide.

It is usually detected by endoscopy, which involves inserting a thin tube with a camera on the end into a patient's stomach.

Prof Yeoh said the blood test, which is less invasive than endoscopy, will greatly simplify the diagnosis of gastric cancer and allow for early intervention.

The test works by measuring levels of micro-RNA, which helps regulate genes. It is cheaper than endoscopy and results can be received on the same day. 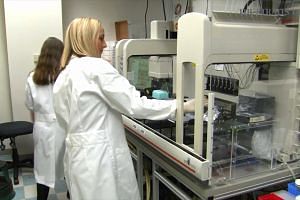 Blood test could catch eight cancers before they spread

The project, led by Prof Yeoh under the Singapore Gastric Cancer Consortium, was one of four which received a grant from the National Medical Research Council yesterday.

A total of $82 million was awarded to projects under the Open Fund Large Collaborative Grants programme.

This is the highest amount given in a single grant call since the programme was launched in 2016, said Health Minister Gan Kim Yong, who was the guest of honour at the awards ceremony at One Farrer Hotel.

The consortium was awarded a $25 million grant. It had previously received a total of $50 million in government grants in 2007 and 2013.

Led by Professor Tan Eng King from the National Neuroscience Institute, the project aims to identify risk factors and develop new drugs to treat Parkinson's disease, which affects three in 1,000 people in Singapore aged 50 and above.

The team is also working on using stem cell transplants to replace nerve cells lost in the brain as a result of the disease, Prof Tan said.

The Singapore Lymphoma Translational Study was given $10 million, and a project on precision medicine for cardiovascular disease and diabetes in Asian populations was awarded $22 million.

Said Mr Gan: "Scientific discoveries and new research evidence are fundamental in the development of medical innovations that can translate into better clinical practices and policies, leading ultimately to improved patient care and better health for Singaporeans."

A version of this article appeared in the print edition of The Straits Times on April 04, 2019, with the headline 'Blood test for gastric cancer could be ready by year end'. Subscribe
Topics:
More
Whatsapp Linkedin FB Messenger Telegram Reddit WeChat Pinterest Print Purchase Article Copy permalink