Asians are genetically more predisposed to diabetes than Caucasians, said Dr Annie Ling, director of policy, research and surveillance at the Health Promotion Board (HPB).

For the same BMI, or body mass index, an Asian has 3 per cent to 4 per cent more fat than a Caucasian.

This is why although only 10.6 per cent of people here are obese, 11.3 per cent are diabetic. In Britain, which has an obesity rate of 25 per cent, only 6.2 per cent of its population are diabetic, said Dr Ling. 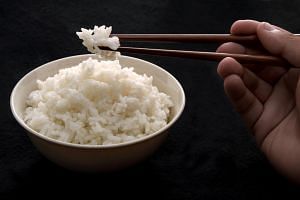 In fact, Singapore has the second- highest proportion of diabetics in its population among developed countries, trailing only the United States. 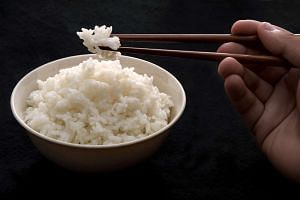 Hooked on white rice, but some ready to change diet

Dr Ling said that for the same amount of carbohydrates consumed, the glucose response in the blood of Asians could be as high as double that of Caucasians.

Singapore has the second-highest proportion of diabetics in its population among developed countries, trailing only the US.

This is why it is even more important for Asians to reduce consumption of food with a high glycaemic index as it can result in sugar spikes.

With more glucose in the blood, the pancreas has to produce more insulin. When this happens frequently, it could lead to either a shortage of insulin or insulin resistance. This could leave sugar in the blood, a condition that could damage organs such as the kidneys or the eyes.

Dr Ling said people here are consuming about the correct proportion of carbohydrates, which make up 52 per cent of the food they eat. The problem is that instead of taking rice and wheat in their natural form, most consume refined carbohydrates. These are digested quickly and result in a sugar spike.

Wholegrain rice made up only 5 per cent of rice sold here last year.

Aside from food, Dr Ling said exercise is important in reducing the risk of getting diabetes. Just a 15- minute walk every day can cut the risk of dying of the condition by 4 per cent. She added that the benefit of exercise for diabetics is even higher than for the general population.

A version of this article appeared in the print edition of The Straits Times on May 06, 2016, with the headline 'Asians 'more at risk of diabetes than Caucasians''. Subscribe
Topics:
More
Whatsapp Linkedin FB Messenger Telegram Reddit WeChat Pinterest Print Purchase Article Copy permalink