SINGAPORE - Madam Siti Hamidah, 61, who has a background in psychology, is trained in social work and is a senior counsellor.

But she found herself "really overwhelmed" and "lost" when she became the primary caregiver for her 89-year-old bedridden mother who suffered a stroke two years ago.

She said: "Up till then my mother was a very strong woman, so being bedridden was hard for her. It was hard for me as well to see her like that. I guess what would have been helpful then would have been having someone there, a shoulder to cry on and to be able to know what to do at that critical stage."

She hopes that there will be more channels for caregivers to spend time with one another to obtain support from one another, and that the process of finding out about the resources available to them would be made less challenging.

Madam Hamidah, other caregivers and caregiving service providers took part in a series of focus group discussions (FGD) between September and December last year. The discussions were held as part of a review by the Ministry of Health to strengthen support for caregiving for seniors.

A total of 19 FGDs have been conducted with over 200 caregivers, caregiving service providers and stakeholders.

Senior Minister of State for Health Edwin Tong, who was at a dialogue session with caregiving service providers on Friday (Jan 18) at Caregivers Alliance Limited, said four recurrent themes came up during his discussions with various stakeholders.

- increasing the number of assistance schemes for caregivers who opt for homecare;

- helping new caregivers navigate the resources available to them; and

- providing working caregivers flexibility in their work arrangements so that they can fulfil their caregiving responsibilities. 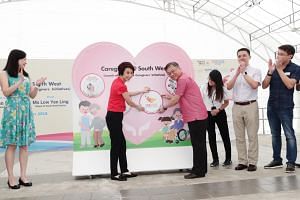 Caregivers, fret not, more help is on the way

Mr Tong said that because caregiving was a 24/7 job, without any pre-defined spikes or downtime, caregivers sometimes did not know when they might need time away from their caregiving duties. Therefore, he said, there was a need for respite options to be flexible, allowing caregivers, for instance, to request for respite care on short notice in case of emergencies.

Turning to the issue of financial assistance schemes available for homecare compared to institutional care, Mr Tong acknowledged that it might not be a level playing field. He said there was a need to increase the options available for caregivers who opted for homecare for their loved ones.

He said: "We want our seniors to age in place, to be in the community for as long as they can, to be cared for by people they know and who love them. So we want to see whether we can assist them financially as well, to defray some of the costs that they will invariably incur."

Mr Tong said the costs might include expenses for supplies such as diapers, medication or for hiring domestic help.

He said that the ministry was looking at all the themes that emerged from the discussions and was in the process of putting together a package to address concerns. Details would be announced in a "matter of weeks".