There is no currency conversion fee for card users and exchange rates are competitive, says Nets

The next time you cross the border into Johor Baru to shop, you might not need to take cash along - but don't forget your Nets ATM card.

There are now more than 4,500 Nets acceptance points in Malaysia, and people with these cards can use them in the same way that they do in Singapore, The Straits Times has learnt.

The use of these cards in Malaysia will also not incur any currency conversion fees, and card holders will enjoy "competitive exchange rates", according to Nets.

Responding to queries from ST, a spokesman for the e-payments giant said last Friday that these Nets acceptance points are now available "throughout Malaysia", including in shopping malls in Johor Baru known to be popular among Singaporeans, such as JB City Square, KSL City and Sutera.

The distribution of the points is not known, however, nor the cities they are in.

But just as they would here, those with Nets-enabled cards issued by Singapore banks DBS/POSB, OCBC and United Overseas Bank can insert their cards into an acceptance point terminal, key in their personal identification number and complete their transaction.

These Nets acceptance points have been in Malaysia since this month and mark the first time that Nets ATM cards can be used outside of Singapore. 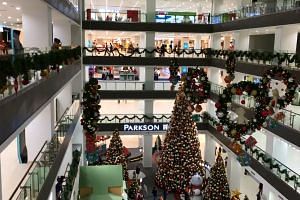 New malls to check out in JB

I feel that this is a good move, since it is a hassle sometimes if I decide to go to Malaysia at the last minute and need to change cash into ringgit. I look forward to its convenience and the ease of mind I will have without having to carry cash. This will make shopping so much easier.

MR IQBAL MOHAMMED, who goes to Johor Baru with his family and friends about once a week to eat and shop.

The availability of these Nets machines is due to a "reciprocal acceptance" partnership between the payment service provider and its counterpart in Malaysia, PayNet.

PayNet cards will be accepted on Nets' network here next year, said the Nets spokesman.

He added: "Paying with Nets comes with several advantages - from not having to physically carry foreign currency and risk running out of cash, to enjoying competitive exchange rates and zero currency conversion fees when consumers pay with their Nets ATM card."

When asked if Nets plans to expand the reach of its ATM card usage overseas, the spokesman said the company has been growing the use of its NetsPay mobile app, which allows digital payments and transactions such as fund transfers.

For instance, in September, Nets partnered UnionPay International, the Chinese card network, to enable users of its NetsPay mobile app to scan and pay for purchases at over 7.5 million UnionPay QR code merchants globally.

According to the Nets spokesman, there are now more than 11 million Nets ATM cards on the market.

Mr Iqbal Mohammed, 28, goes to Johor Baru with his family and friends about once a week to eat and shop. Most of his time there is spent at malls such as JB City Square and KSL City, and he welcomes the use of Nets ATM cards to make his payments.

"I feel that this is a good move, since it is a hassle sometimes if I decide to go to Malaysia at the last minute and need to change cash into ringgit," he said.

"I look forward to its convenience and the ease of mind I will have without having to carry cash. This will make shopping so much easier."

A version of this article appeared in the print edition of The Straits Times on November 19, 2018, with the headline 'Headed for Malaysia? Shop there using Nets at over 4,500 points'. Subscribe
Topics:
More
Whatsapp Linkedin FB Messenger Telegram Reddit WeChat Pinterest Print Purchase Article Copy permalink