SINGAPORE - Wanting the best for youth at risk, Mr Lee Seng Meng spent days and nights building rapport with them and counselling them.

Concerned about the support that terminally ill patients were receiving in their last days, Ms Tan Ching Yee joined the palliative care service.

For their efforts in helping different segments of society, both received the Outstanding Social Worker Award on Friday afternoon (Nov 15) at the Istana.

It is the 20th year that the Singapore Association of Social Workers has organised the award, which was presented to the winners by President Halimah Yacob and Minister for Social and Family Development and Second Minister for National Development Desmond Lee.

Mr Lee Seng Meng, 39, who has been in the youth work sector for 15 years, did not always want to do social work.

"I wanted to be a police officer," he said.

But after taking some social work modules, he felt inspired enough to change his university major from economics to social work.

An internship working with youth in gangs solidified his passion for social work.

"I wanted to work with them, not catch them," he said with a laugh.

He joined Shine Children and Youth Services as a social worker in 2004 and is now director of targeted intervention services.

Through the years, he helped found the Youth Work Association, which pools the expertise of those involved in youth work across the island.

He also set up the Youth Community Outreach Programme in 2007, where youth spread positive messages to their peers while tagging along on police patrols or by being ambassadors for crime prevention campaigns. 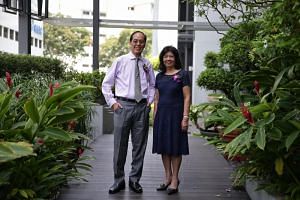 As he has had to spend many extra hours on the job, the tough balancing act is managing time with his family and the youths he works with, said Mr Lee, who is married with two children - a daughter, nine, and a son, six.

Five years ago, on Mr Lee's birthday and a day before his son's first birthday, a male teen texted him saying his father, a single parent, had died.

Despite being on hospitalisation leave for a gastric issue, as well as his family commitments, he spent the next few days by the boy's side to help him get through the difficult time.

His family has been very understanding of his schedule, said Mr Lee. And the work is very meaningful to him, as "these youth have so much talent and potential, but people look at them as youth at risk or youth with problems", he added.

The other award recipient, Ms Tan, joined the social work sector in 1992 as a medical social worker at a hospital.

Over more than 25 years, she has worked at different organisations and with people of varying needs, such as older people who were abused or those who have experienced family violence.

In 2003, she was invited among others to join the Elder Protection Team set up by the then Ministry of Community Development, Youth and Sports to look into the concerns of older people who had experienced abuse or had mental health or health issues.

Two years ago, she joined HCA Hospice Care, where she transformed the hospice's public education programme after gathering feedback from patients and families on the important topics of interest.

The programme then tackled tough questions such as how to recognise the signs when a person is dying, and what are the concerns of someone dying.

"Most people, when talking about death, think of sadness and depressing moments. But our work focuses on helping them live the best they can every day," said Ms Tan, 49, head of psychosocial services at the hospice.

The Promising Social Worker award, given to those newer in the field, was presented to Mr Lim Shen Yong this year for his involvement in youth work.

Mr Lim, 34, a senior social worker at Youth Infinity under AMKFSC Community Services, works with youth, in particular those with substance abuse issues.

In 2017, he was involved in a project to raise awareness about youth substance abuse and mental wellness, and also presented on the topic at an Asean conference in September this year.

"Substance abuse can be addictive, and during the recovery stage, positive support, especially from the family is very important, so this is what we try to help with as social workers," said Mr Lim.