Inflight manager, who wrote a book about his struggles, does not fear death anymore

There are five scars, a couple of them overlapping, on Mr Richard Ng's body.

"One's from the bladder, one's from the colon and two from the liver," he says, referring to the operations he's had to remove cancerous tumours from different parts in his body.

It almost beggars belief but the airline inflight manager has battled the Big C four times, yes four, over a 15-year-period.

And the fifth scar?

Well, that's from another major operation to fix a life-threatening bowel obstruction. That last procedure in 2012 - which involved cutting off a portion of his intestines - now leaves him grappling with the runs almost every day. It's a nuisance, the 52-year-old says, but he is just glad to be alive and has learnt to cope with it.

The third of five children, he didn't set out to be The Miracle Man, as his friends now call him.

His late father walked out on the family before he started primary school, leaving his washerwoman mother to raise her brood alone.

After completing his national service, the former student of Tanjong Katong Technical School became a flight attendant when he was 22. Life was carefree .

"I just wanted the best things in life in the shortest time possible."

Unfortunately, life did not deal him such a great hand. In 1993, he had his first rude shock when he started to feel pain while urinating. A suspected urinary tract infection turned out to be a lot more sinister when his symptoms would not go away, despite several visits to the doctor.

"It wasn't tainted urine I was passing out anymore after a while but fresh blood," he says.

After several tests, including a CT scan, his GP referred him to a specialist who told him he had a tumour in his bladder. A biopsy revealed that he had stage one bladder carcinoma.

"The specialist wasn't too worried about it so I wasn't too," says Mr Ng who had the tumour removed in an operation.

Back at work after a couple of months, he didn't even give up smoking, identified as a high-risk factor for bladder cancer.

All was well for the next decade. During that time, he met and married a colleague, the daughter of a Taiwanese general. The couple have no children.

"I had issues with my bowel movements," he says referring to frequent bouts of diarrhoea and constipation.

A yearly scan - de rigueur since his bladder scare - showed a tumour the size of a Chinese dumpling in his intestines. The diagnosis - stage two colorectal cancer - was a devastating jolt especially since he was fit and active, running 30km a week and doing 80kg on the bench press.

"It wasn't just about myself anymore. A lot of scenarios popped into my head. Would I survive? And if I did, would the quality of my life be different? Would I be able to work to support my family? I felt so helpless and vulnerable, I wept."

After an operation to remove the tumour, he went through four cycles of chemotherapy and three weeks of radiotherapy.

"I felt like a chicken in a microwave machine during the radiotherapy sessions. I had to do it from Monday to Friday for three weeks. The weekends were for the machine to rest, not me," quips Mr Ng who stayed away from work for more than half a year.

The episode, he says, changed him for the better.

"I became more conscious of how my actions and words can affect others," he says, adding that he gave up smoking.

Any hopes he had that he was done with the dreaded disease were dashed barely two years later when yet another tumour was detected through his yearly scan, this time on his liver.

The news hurtled him into a pit of despair.

"I almost threw in the towel. I spoke to my wife and told her she would have a better life if she divorced me," he says.

She would have none of it.

"She was unbelievably positive and said we could weather this together," he says.

The operation was successful but the reprieve lasted barely a year. Another 2cm lesion appeared on another part of his liver, calling for another liver resection.

Emotionally spent and psychologically defeated, he seriously considered refusing treatment. He was told that if he did, he had, at most, six months to live.

Fortunately, both his doctor and his wife convinced him he needed to give himself a fighting chance.

"It was time to just focus all my energies on fighting instead of having so many different thoughts. At least if I died while trying, it wouldn't be so bad."

He adds: "I told the doctor, 'You can't be cutting me up each time you find another tumour. There has to be another option.'"

A month after his second liver operation in July 2007, he left for Hong Kong. His employers paid for a major portion of the procedure even though it was not done in Singapore.

Before treatment began at the Hong Kong Sanatorium and Hospital, he was told that another eight tumours had surfaced on his liver.

"It was another big blow. I thought I wouldn't make it," he recalls.

Mr Ng was warded for a week in an isolated room at the hospital after the treatment. Each day, hospital staff, wearing special suits, would measure his radioactive levels and leave his meals outside the door.

The nuclear medicine worked like a charm, vanquishing all his tumours. But yet another trial awaited him nine months later.

The flight manager began suffering bouts of excruciating pain in his stomach. The villains this time were adhesions and scar tissues in his stomach caused by the numerous operations he had.

He had 22 attacks - "I kept count" - over two years. One particularly harrowing one in New York nearly killed him; he was warded in a hospital there for five days. The intense, crippling pain could be relieved only by morphine jabs or doses of buscopan, a drug used to relieve stomach pain and bowel cramps. 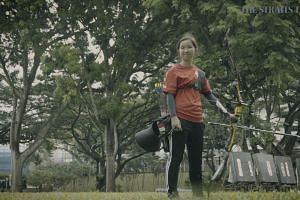 "I had to be registered with the Central Narcotics Bureau because I was taking those drugs," says Mr Ng who had an intestine-shortening operation in 2012.

That got rid of the pain but has left him with daily bouts of diarrhoea for the last six years, forcing him to be extremely careful about what he eats, and where and when.

Because of all that he has gone through, Mr Ng is determined to live life right.

"We're all in transit here and should do our best to have a positive impact on other people's lives," says the volunteer at Assisi Hospice.

Three years ago, he penned Silent Scream Of A Cancer Warrior, a book which chronicles his battles.

"I wrote it to inspire those fighting cancer, to increase awareness and to share hope," says Mr Ng who donated all proceeds from the book's sales, about $8,000, to the Singapore Cancer Society.

"Dying is easy. But we have to fight and live for the ones we love."