SINGAPORE - As temperatures rise, residents in Housing Board flats could have cooler homes with integrated smart systems - without having to turn on the air-conditioner or switches.

HDB is working with industrial giant Evonik to study incorporating a high-performance insulation material into the roof panels of apartment blocks to reduce heat gain and transmission.

The aim is to reduce ambient - or indoor - temperature by 2 deg C.

The firm's new silicon-based material, called Calostat, has been adopted in developments in Germany, Switzerland and London, and the study on its use for HDB roofs is expected to start early next year.

If these tests are successful, the material could potentially be used in other parts of HDB buildings, such as the facade and gable ends, to enhance residents' comfort, HDB said.

HDB signed an agreement with Evonik (SEA) at the Urban Sustainability R&D Congress on Tuesday (July 23).

HDB and Evonik are also researching the use of 3D concrete printing in construction, a move that will reduce the time needed to build flats and will offer buyers more design options for their homes.

Unlike the current fabricating process which takes up to two months to complete, this does not require the creation of customised mould sets.

Each smart-enabled flat will come with a smart distribution board that can seamlessly integrate devices and solutions for different providers. This extends to smart lighting, motion sensors and even smart curtains.

Households with elderly members can also choose to install a monitoring system, where motion sensors in the home can detect and "learn" the movements of the elderly, such as the time they get out of bed or leave their homes. If the sensors fail to detect the regular movements, an alert can be sent to their next of kin or caregiver.

In a speech at the opening of the two-day conference, National Development Minister Lawrence Wong said that the Government will partner more companies on research and development (R&D) for urban solutions.

He announced that $70 million of the $150 million allocated under the Cities of Tomorrow (CoT) research programme will be invested over the next two years.

The CoT programme, which charts out critical research areas is part of the $900 million set aside for urban solutions and sustainability, under the Research, Innovation and Enterprise 2020 plan to establish Singapore as a R&D hub. 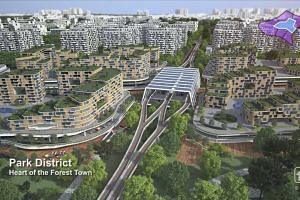 Since the programme began in 2017, 30 grant calls have been launched.

But these efforts tend to be top-down and based on specific national problems, said Mr Wong, who added that the Government wants more companies to drive the process.

It has therefore up a Built Environment Technology Alliance or Beta, a membership platform to bring together industry players.

"With Beta, we won't specify the problem statements. Instead we will let companies drive the process and specify their needs and requirements," said Mr Wong.

A developer could bring a problem to Beta and it will link the developer with research institutions. Or a company may want to deploy a new product, and Beta can help it find potential adopters willing to test-bed and commercialise the product.

"Beta will also provide physical space, equipment and facilities... to reduce their upfront capital expenditure. There will also be funding support to help companies co-share the cost and risk of R&D," Mr Wong added.

While it is still early days and details are not fully available yet, companies such as CapitaLand, City Developments Limited, Sembcorp, Surbana and Woh Hup have expressed interest to join the alliance.

The opening of the conference at the Suntec Singapore Convention and Exhibition Centre was attended by around 1,000 researchers, business representatives and public officials.

Five R&D awards were also given out by Mr Wong to recognise and encourage outstanding R&D efforts from the MND family and partners. These went to the National Environment Agency, Energy Market Authority, A*Star, HDB and a joint project the board undertook in collaboration with NUS, NParks and URA.