In all, 1,560 flats were resold last month, 8.8 per cent more than in December, according to flash estimates from real estate portal SRX yesterday.

Resale prices inched up by 0.5 per cent from December. But compared with January last year, they were 1.1 per cent lower, and 13.9 per cent down from the peak in April 2013.

While December to February can be sluggish months for the property market because of the festive season, OrangeTee & Tie research head Christine Sun said last month's figures might be due to "some sellers coming to terms with the cooling measures".

Said Ms Sun: "Many sellers had been holding on to their flats in the hope that prices might increase, or they were unsure how the cooling measures might turn out."

"Now that things are clearer, some are dropping their prices to a more attractive level. There is also still ongoing concern about the depreciating leases of older flats."

But ZACD Group executive director Nicholas Mak said he would not read too much into the data as overall, the resale price index is still within expectation.

Flat prices should either flatline or decline by around negative 1 per cent for the whole year, he added.

SRX data also showed that the premium that buyers were prepared to pay over market value had increased last month compared with December. 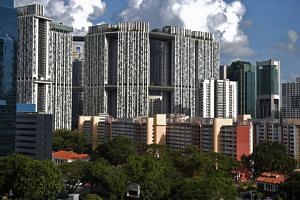 However, buyers were more prepared to fork out more in relation to the valuation for bigger flats.

The estate in which buyers paid the highest median TOX of $8,000 was Pasir Ris, followed by Woodlands with $4,000.

The mature estates of Clementi and Toa Payoh posted the lowest median TOX with negative $8,500. Serangoon was the next lowest at negative $7,000.