SINGAPORE - The Housing Board (HDB) on Friday (Sept 30) embarked on an ultrasound inspection of the sunshades in four blocks in Tampines.

No one was injured in the incident, and the cause is still under investigation. HDB engineers have also ascertained that the building is structurally safe.

HDB said it will be using ultrasound scanning equipment to check the sunshades at the affected block and three other blocks which have similar sunshades - Blocks 201A, 201B and 201D, Tampines Street 21. 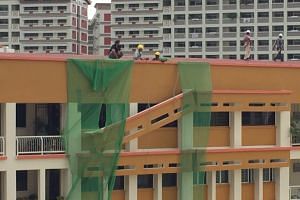 HDB investigating if rebars were installed properly in Tampines incident

HDB said the ultrasound scan "seeks to assess the condition of each sunshade, including the presence of reinforcement bars embedded within the sunshades as this is one of the areas of our investigation".

The ultrasound scanner transmits magnetic waves into the concrete and detects the presence of metal reinforcement bars inside the sunshade.

Scaffolding and safety barriers have been erected at the site in preparation for the checks.

HDB added that it will work with the Tampines Town Council to repair the sunshade on the third storey, which was hit by the dislodged sunshade on Sunday.

The dislodged sunshade was taken to a laboratory on Sunday where more checks will be done.

"To get a complete and accurate picture of the cause behind the incident, we need both the laboratory investigation and site checks to run their full course," HDB said, adding that it will share the investigation outcome and the follow-up measures.