SINGAPORE (THE NEW PAPER) - Several hawkers have complained about the alleged poor management of the Pasir Ris Central Hawker Centre.

The centre, which had its grand opening on July 14 after starting operations in January, is run by NTUC Foodfare and has 42 stalls over two floors.

Some stallholders told The New Paper, on condition of anonymity, that NTUC Foodfare disbursed takings from cashless transactions to them only after five months.

They also complained of tables not being cleared by the cleaning contractors, and of crockery being damaged by the dishwashers.

A tenant who contacted TNP said the management had initially informed tenants that the cashless transactions would be disbursed within 1½ months.

He said: "It was only after a formal e-mail was sent to higher management with a copy to the CEO that action was taken."

When TNP went to the centre, several hawkers said they were upset with how it was being run.

A stallholder said that about five stalls had closed since its opening in January because of poor business.

The hawkers also shared photographs of some of the cleaning crew sleeping, and piles of dishes left untouched on tables.

When TNP was there, several trays and dishes remained uncleared for close to an hour.

There have also been complaints about uncleared tables on the centre's Facebook page.

Replying to TNP's queries, a NTUC Foodfare spokesman said it had faced some difficulties because of a delay in the extraction of transaction records for disbursement. 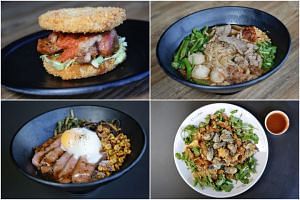 "However, we managed to make the first tranche of disbursement for Feb/March transactions to the tenants on June 1," she said.

After the system stabilised, a second disbursement was made on July 1, and subsequent transactions will be disbursed monthly, the spokeman added.

NTUC Foodfare has refunded the fees for the cashless system up to June 30 out of goodwill.

However, it refuted the claims about the non-clearing of tables, stressing that the cleaning contractors had performed their duties as set out in the contract.

It was previously reported that the opening of the centre, which was touted as offering both traditional fare and "hipster" cuisine, was marred by delays after being scheduled to open last November.

A stallholder said: "There have been problems with the management since the beginning, and while there has been slight improvements, the problems are still there."