SINGAPORE - The Rollei 35 - once a popular compact camera here - was largely assembled by teenage girls who were employed in droves in the 1970s for their nimble fingers.

Rollei, a German company which produced optical instruments, was considered one of the "best companies" to work at in Singapore when it moved here to manufacture cameras and other electronics, said Mr Chong Nam Soy, 68, who worked there as a supervisor.

He was in charge of a team which produced about 350 shutters on a good day. Rollei, which the Economic Development Board had attracted from Germany, was one of the most advanced companies here, said Mr Chong, who was trained at the company's headquarters for seven months.

"Rollei cameras were supposed to be the best in the world and youngsters who travelled would snap up the compact range priced around $200 to $300," he said.

Mr Chong's experience working at the company, which built its own factory in Kampong Chai Chee, is being documented in a heritage research project supported by the National Heritage Board (NHB) and administered by Nanyang Technological University's Economic Growth Centre (EGC).

The project, called Theatres of History and Memory: Industrial Heritage of 20th Century Singapore, is led by historian Loh Kah Seng and covers Singapore's industries between the 1900s and 1980s.

Work started in April and spans the light industries connected to the entrepot trade, various light and heavy industries in Jurong Industrial Estate such as the National Iron and Steel Mills, and the construction industry.

Dr Loh, of Chronicles Research and Education consultancy, said stories like Mr Chong's offer insight into an often-forgotten part of the country's social and economic history, beyond mainstream heritage topics such as architectural buildings and monuments.

He is also inviting others to contribute to the project.

Dr Loh added: "We all know the broad outline of Singapore's industrialisation from policymakers and political leaders but it is also striking how much we don't know. 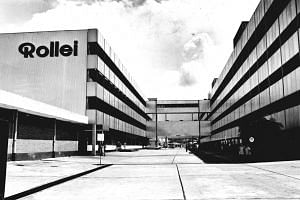 Made by Rollei Singapore - a peek into history

"There have been many invisible hands involved in the creation of history. For example, from the mid-1960s to 1980s, Singapore was dotted with garment and electronic factories and a lot of families were built on these jobs."

Mr Chong believes there are also some lessons from the past for today's post-industrial economy. The retired production engineering training officer noted, for instance, that one reason for Rollei's collapse in the 1980s was because it could not compete with the Japanese, who had mechanised assembly processes.

Dr Loh is hoping factory workers, technicians and engineers, quality control supervisors and management level staff can contribute to the project by sharing their stories, artefacts, tools of the trade and photos. He added that the histories of small and medium-sized enterprises and family-run business are also lacking.

The contributions will add to official data and annual reports from government agencies, he said.

The documentation and participatory project also has a Facebook group called Theatres of History & Memory: Industrial Heritage of 20th Century Singapore. It has about 1,000 members.

NHB's Heritage Research Grant scheme, which was launched in 2015, has supported 14 projects so far. Each project can get up to $150,000 in funds. The board's spokesman said these grant projects will complement NHB's nationwide surveys on Singapore's heritage by adding depth to specific areas of heritage under study.

Those with contributions can e-mail lohkahseng@chroniclesresearch.com