A worrying trend is unfolding in the United States-China relationship, of a marked hardening of their attitudes towards each other, but it is up to their leaders to reach an agreement that is politically acceptable to both sides, said Prime Minister Lee Hsien Loong.

In his keynote address at the Shangri-La Dialogue yesterday, he noted that a negative view of China has become the norm in the US, not just in the White House, but in Congress, the military, the media, academics and among non-governmental organisations. Likewise, in China. "Hardly anyone in China, whether in government, academia or the media, can be found who is prepared to speak up for a more positive and benign interpretation of the US' intent," he said.

In the US, PM Lee said, the security establishment officially describes China as a "revisionist power" and a "strategic competitor". The recent Presidential Executive Order, on securing the information and communications technology and services supply chain, stated it is aimed at "foreign adversaries". "It stopped just short of naming any specific country, but made quite clear what actions the US intends to take," said PM Lee.

In addition, there is a growing bipartisan consensus that China has taken advantage of the US for far too long; that China has overtaken, or will soon overtake, the US in areas of advanced technology, such as artificial intelligence and some aspects of military technology, through underhand means.

"Americans now talk openly of containing China, and to do so soon before it is too late, the way they used to talk about the USSR and the Soviet bloc," PM Lee added.

Even American businesses, which used to be the strongest supporters of China because they profited from its growth, have soured on it. They had advocated China's accession to the World Trade Organisation and acted as a balancing voice when protectionism grew in the US. But, he noted: "Now, that goodwill has all but evaporated."

He added: "This loss of goodwill on the part of an important constituency is a serious problem for China, which the Chinese have not fully appreciated or dealt with." 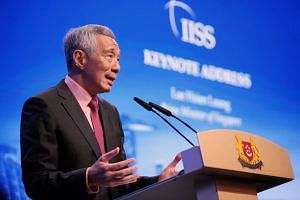 China, US must avert conflict or fallout will be damaging: Lee Hsien Loong

Instead, some in China are convinced that the US will never be satisfied and will thwart its legitimate ambitions, irrespective of what the Chinese do or concede on individual issues. "They are alarmed by talk of a 'clash of civilisations' between the US and China. They reject what they see as efforts by the US to impose its political system and values on China," said PM Lee.

Nationalist fervour in China has been bubbling up, he said. TV stations are rebroadcasting old movies of the 1950-53 Korean War, which is known in China as the war to resist US and assist North Korea. On the Internet, a "US trade war song" is popular, derived from a 1960s movie about the Sino-Japanese War.

It would be up to the countries' political leaders to avoid a conflict that would be "extremely damaging", he said. This is hard, he added, because leaders on both sides are facing powerful domestic pressures.

The political mood in the US is divided and disgruntled, he said, with declining confidence in globalisation and multilateralism. Nearly half of all Americans have an unfavourable opinion of China.

"As the presidential elections approach, these attitudes will surely deepen because neither the Republicans nor the Democrats will want to risk being accused of being 'soft' on China," said PM Lee.

In China, leaders face strong internal pressures too, although they do not have US-style presidential elections, he said. "They know they have major issues to deal with at home," said PM Lee, such as uneven growth, rural poverty and rising expectations for a better quality of life.

Further, both sides are sensitive about being perceived as weak, he said. The US wants to show that it has come out ahead in any deal, out of a political necessity. The Chinese leaders, deeply attuned to their history, cannot afford to appear to succumb to Western pressure to accept an "unequal" treaty.

This zero-sum dynamic makes it very hard to construct an agreement that is politically acceptable to both parties, said PM Lee. But it is in the interests of both to reach an accommodation and to persuade their people to accept it.

"They both need to keep their relationship steady so that both can focus on their respective pressing domestic priorities, and not be distracted by troubled relations with the other," he added.

A version of this article appeared in the print edition of The Straits Times on June 01, 2019, with the headline 'Hardening attitudes against each other a worrying trend'. Subscribe
Topics:
More
Whatsapp Linkedin FB Messenger Telegram Reddit WeChat Pinterest Print Purchase Article Copy permalink