SINGAPORE - By 2040, the megaport currently being constructed at Tuas will be completed. All of Singapore's container port operations - including those at Tanjong Pagar, Keppel, Brani and Pasir Panjang - will be moved to Tuas, in the west.

The multi-billion dollar project at Tuas will increase the port's capacity to 65 million TEUs (twenty-foot equivalent units) of cargo - more than double what the port handled last year.

The move comes as Singapore looks to maintain its position as the world's busiest transshipment hub - in the face of keen competition from other ports in the region.

This week, Insight gives readers on a behind-the-scenes look at the story of Tuas port - including three questions you may have about the move to Tuas.

Tuas has sheltered deep waters that are suitable for port operations. It is also close to both international shipping routes and industrial areas in Jurong.

Placing all port activities in one location in Tuas will boost efficiency by reducing the distance and complexity of transporting container boxes between terminals - which is currently being done, for example, between Keppel and Pasir Panjang.

It will also reduce road congestion caused by the trucks transporting containers. 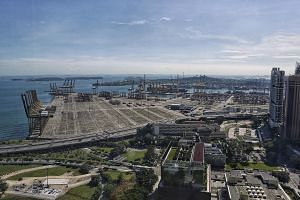 As port operations expanded in the 1980s and 1990s, government agencies debated over whether to locate the new port terminal at Pasir Panjang or at Tuas.

Moving to Tuas had its advantages - including that of locating heavy infrastructure further away from the city. But expanding into Pasir Panjang would mean the new terminal would be closer and better connected to the city terminals. The debate concluded in 1992, with the decision to build the terminal in Pasir Panjang.

But discussions re-opened after 2010, and Tuas was eventually approved as the location to which all port terminals would move.

Said Prime Minister Lee Hsien Loong in a 2015 speech: "We looked at Tuas before, we were not ready. Since then we have made more reclamation in Tuas and we have looked at it again and this time we think we can do a really first class port from scratch in Tuas."

3. What will happen to land vacated by current port operations?

Land freed up by port terminals near the city and in Pasir Panjang will be available for redevelopment - including 925 hectares of valuable waterfront land.

In 2013, the Urban Redevelopment Authority unveiled plans to redevelop the land into an area called the Greater Southern Waterfront.

The new waterfront city will have mixed uses, from housing and commercial to cultural and entertainment - although the Government has not decided whether to include public housing.

Plans for the first, 44ha plot - a housing development on the plot of land occupied by Keppel Club - will be ready in one to two years' time. An exhibition will be held to solicit feedback from the public.