More adults taking a second or even third shot at marriage are finding themselves unable to find happiness, and more of them are choosing to end their latest union in yet another divorce.

The proportion of men and women who divorced under the Women's Charter for at least a second time has more than doubled from 2005 to last year.

Last year, 513 men - who were previously divorced - also ended their latest marriage. This is more than triple the 153 men in similar situations in 2005.

The number of women with at least two ex-husbands is not far behind.

Last year, 463 women who ended their marriage had been divorced before, more than triple the 126 women in such situations in 2005. These at least twice-divorced women made up 8.5 per cent of the women who divorced last year - almost triple the 3.1 per cent in 2005. 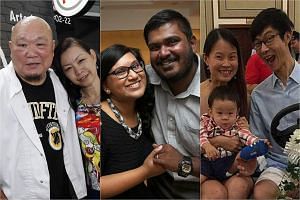 No money, no getting married: many delaying to build careers first

The Sunday Times calculated the numbers from the Statistics of Marriages and Divorces 2015 report, released by the Singapore Department of Statistics on July 13.

The at-least-twice-divorced data in this Sunday Times report refers to non-Muslim divorces. It also refers to those whose previous marital status was known, as there were some who did not state it.

Divorce lawyers and counsellors said the numbers have risen as more people are remarrying after a divorce, but more couples are also less tolerant of a lousy marriage or are reluctant to work through their marital woes.

Lawyer Michelle Woodworth, of RHTLaw Taylor Wessing, said: " It is becoming apparent that people are generally placing a higher premium on their own happiness and are less tolerant in a marriage which is not meeting their needs."

Besides, Singaporeans have become more casual about divorces and less fearful about being judged negatively by others for having had multiple divorces, lawyer Louis Lim of William Poh and Louis Lim said.

Those interviewed said that of their clients who have gone through more than one divorce, most have had two failed marriages. A small number divorced three times.

But one lawyer, who declined to be named, has a client going through his fourth divorce.

The man, a professional in his 50s, has a drug addiction problem and a violent temper and that could be why his marriages kept souring, the lawyer said.

What counsellors say these divorcees have in common is this: the tendency to blame their spouses for the unhappy marriage without realising their part in contributing to the marital breakdown.

So they repeat the same problematic behaviour or take their emotional baggage from their first marriage with them to their subsequent unions, which could lead to another split.

Mrs Juliana Toh, clinical director of the Counselling and Care Centre, said: "A marital breakdown is never due to just one person.

"If you don't make sense of your part in it, chances are you will repeat the same pattern of behaviour in your next marriage. You need to address the losses from your first marriage first."

Those interviewed also point out that some rush into a second marriage for various reasons. For example, they could be lonely and they want a new spouse to help them care for their young children.

After the honeymoon ends, they realise they are not all that compatible or the difficulties of a blended family with stepchildren and ex-spouses to deal with sink in.

The rising numbers also point to the challenges faced by those in second or subsequent marriages, such as the difficulties of step-parenting, sociologist Paulin Straughan noted.

To stem this trend of repeat divorces, counsellor Jonathan Siew of Care Corner Counselling Centre encourages remarrying couples to go for marriage preparation courses that will help them address the baggage from their first marriage and to prepare them for the challenges of the second one.

John (not his real name) is now wary of matrimony as he is going through his second divorce. He has no children.

The manager, 35, separated from his first wife after three years as they had drifted apart.

He put in "200 per cent" into his second marriage to a sales executive as he wanted to have children with her.

But he said she started picking fights with him and insisted on doing things her way after they tied the knot after a six-month courtship.

The final straw came when she insisted on renting out a room in their flat to two female colleagues. He reluctantly agreed.

Then she asked him not to live in their matrimonial flat, claiming it was inconvenient for her female friends to share a flat with a man.

He told her off. She refused to talk to him for over a year and he filed for a divorce.

John said: "I would be very careful about relationships and marriage from now on for all the heartaches and financial impact it involves."