Effort to help businesses like hotels, eateries conserve water to start from this April or May

Water-efficient equipment such as commercial dishwashers will soon carry a green label, in an effort to help businesses such as hotels and restaurants conserve water. This is the latest move in Singapore's push to ensure that taps here do not run dry for future generations.

Yesterday, a record 30 landmarks and buildings, including the National Gallery Singapore and Gardens by the Bay, were lit up in blue to support water conservation.

Part of Bishan-Ang Mo Kio Park was also enveloped in blue - the first time a park is participating in the light-up since it was introduced in 2014.

The Singapore chancery in New York, which houses the Permanent Mission of Singapore to the United Nations, has also been lit up in blue since March 18. 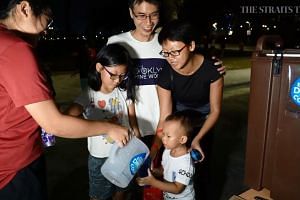 Taps were turned off for a few hours, and pupils used water collected in pails and jerry cans to wash their hands and brush their teeth. In all, 116 schools, from pre-schools to junior colleges, carried out the exercise this month.

Singapore's goal is to reduce daily water consumption to 130 litres per person by 2030.

Showering is the top water guzzler in homes, making up about one-third of total usage.

But steps have been taken to reduce it. In 2015, a trial done in 500 homes fitted with smart shower devices found that each person could save 5 litres of water daily.

"We hope to empower more households with such devices to change their showering habits to save water," said Mr Masagos yesterday when he spoke about the extension of the green label scheme to commercial equipment, such as commercial dishwashers, washer extractors and high pressure jet machines.

This voluntary scheme, which will take into account water and energy efficiency, is being developed by PUB with the Singapore Environment Council. Sellers can get their eligible machines certified with the label from April or May this year.

"It will enable non-domestic customers, such as hotels, F&B outlets and town councils, to make informed purchasing choices on the water efficiency of the equipment used in their business operations," said Mr Masagos.