SINGAPORE - There has been a paradigm shift when it comes to growing economies, from a "grow now, clean up later" approach to one that prioritises both growth and environmental concerns, said Minister for the Environment and Water Resources Masagos Zulkifli on Friday morning (May 18).

"We have started viewing green growth as integral to, and not separate from, long-term economic development. Green growth is the foundation of real and sustainable prosperity," said Mr Masagos during a sustainability event held at the Grand Hyatt Singapore hotel.

Highlighting that the "grow now, clean up later" approach could lead to high costs for current and future generations, in terms of climate change, pollution or scarcity of resources, Mr Masagos said that Singapore has integrated sustainability in its long-term economic growth, and is now reaping the fruits of that foresight.

He added: "Singapore today enjoys the dividends of our early investment in green growth and environmental resilience." These dividends, he said, include a clean, safe and liveable Singapore that attracts talent and investment; as well as the creation of jobs and business opportunities.

One example, he said, was how Singapore managed to turn its water scarcity to business opportunity. In 2015, the water sector contributed $2.25 billion to Singapore's gross domestic product and 14,000 jobs, he said.

But Singapore's success did not come by chance, he said during the fifth Singapore Dialogue on Sustainable World Resources organised by think-tank Singapore Institute of International Affairs.

Instead, it boiled down to three things: policies, partnerships and passion, Mr Masagos added. 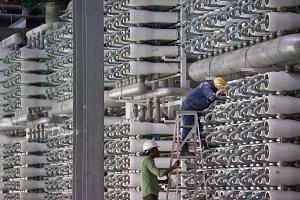 Here are the 5 fastest-growing 'green jobs' in Singapore

Green bonds and other ideas for sustainability in the Budget

Policies such as the upcoming carbon tax next year would not only help to curb earth-warming emissions, he said. It would also encourage large emitters to invest in energy-efficient technologies, with the tax revenue being ploughed into schemes that help firms achieve this, he added.

"The Government will spend more than the carbon tax collected in the initial years, to support green growth projects that deliver emissions reductions," said Mr Masagos.

It was also important to forge partnerships - with Asean and the international community, as well as with non-governmental groups and individuals, he added. Doing so could help identify new green growth areas, and allow Singapore start-ups in these areas to gain access to larger markets in the region, he also said.

But "to unleash the potential for green growth", Singapore must have a critical mass of people who are passionate about the environment, Mr Masagos said.

He cited accountant-turned-business owner Joline Tang as an example. Ms Tang set up The Sustainability Project, which sells items such as metal straws and beeswax wraps that can help people reduce their use of single-use plastics.

Said Mr Masagos: "As we look to the future, it is clear that green growth is the only sustainable path for development. It is the key that can unlock continuing prosperity and well-being for the current and future generations."