SINGAPORE - Helping non-Muslims from a lower socio-economic strata get a better understanding of other races and religions would pay dividends for the whole of society, a report noted on Tuesday (Sept 25).

It suggested national education programmes or regular sports events in housing estates could be tailored for this group, which tend to have fewer interactions with people from other races and religions.

The Institute of Policy Studies made the recommendations after its research noted that Singaporeans would display stronger negative reactions if a terror attack here were to be carried out by foreign Muslims than if Buddhists, Christians or Hindus had been behind it.

The report, which analysed a 2017 survey of around 2,000 respondents, looked at how Singaporeans would react following a terror attack perpetrated by groups that used religious labels.

It found that lower-income and lower-educated non-Muslims were more likely to exhibit Islamophobia if overseas Muslim extremists carried out such an attack here.

The report said people in this cohort have more racially homogeneous social networks that drastically reduce opportunities for interracial interaction.

"This also limits the potential for avenues to encourage a sense of empathy for people of other races and/or religions," it added. 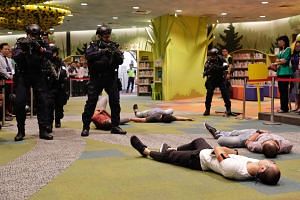 Most Singaporeans do not think there will be a backlash in a terror attack: IPS report

The IPS report suggested that aspects of school courses that teach multicultural values could be applied to programmes tailored for this group.

Their findings suggested that even casual cross-racial ties, such as attending a wedding or celebration of someone of a different race in the previous two years, are enough to enhance trust between different groups.

"We found that such interracial interactions were a significant determinant of inter-religious harmony and support, thus emphasising the importance of providing ample avenues for interracial mingling."

Forum theatre, where audience members participate in the performance, could also be introduced to primary and secondary schools to encourage open dialogue about the sensitive issues of race and ethnicity.

"Art would provide more avenues for the exploration and tackling of implicit biases, which often remain latent when one answers survey questions," added the report.